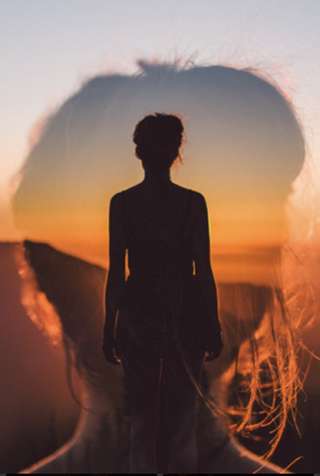 Past the field and smoke-filled highway he can see the late afternoon sky peeking its way through the smog and chaos caused by his arrival as he waits. Deep set eyes,standing tall, a mid length tan-duster on his back, rugged boots and a Yankees cap.

Holding a Fixation Bowie in his left hand, strapped with an AR-15 hanging off his right shoulder slightly touching his hip; he exhales a cold breath of determination and passion...
Intrigue races through his blood allowing him the power to feel; It lingers on, it shows in his face.
Livid lines of life's experiences hide in the pores of his skin, stark hard terror lurks there. He scratches his jaw and opens his eyes wide, he stands a champion for having made it this far.

Her heart speaks to him in mental geographic whispers. He knows she's got his back.. He's not here for the violence, He is all over the place at a race against ironies & double standards, How they abound! He's in an Eagle Globe Anchor mindset, yet he's stuck in a padded room with no view, having banshees for company that officiate at zombie weddings,

His real name is nom de plume yet all the evidence points to the contrary It's his identity that won't be constrained by a piece of paper He's always misunderstood. She showers him with wondrous tenderness, She redefines sincere & honesty.

His world is black and white, middle ground doesn't roll off his tongue He wonders if she knows. Ever resisting the vector of circumstance, they pursue their self-actualization on different paths, Of artistic differences they have compendiums, yet there's not enough distance in miles or meters nor enough difference in the multiverse to drive them apart.
They are forever years old, there friendship is written in stone....

Written by Zazzles (Broom)
Published 10th Jan 2021 | Edited 11th Jan 2021
Like This?
Poems by Author
Comment
#friendship #heroic #humankind
All writing remains the property of the author. Don't use it for any purpose without their permission.
likes 9   reading list entries 5
comments 12   reads 53

Commenting Preference:
The author encourages honest critique.
Re. legned proof
Bluevelvete
10th Jan 2021 5:42am
I want to watch this movie! This reads like an awesome voice over prologue to a kickass movie that I must watch! The back and forth between the two is intoxicating. I love the picture so much, terrific choice!
🌹✨🌹
xoxo

Read poems by Zazzles
Re. legned proof
The_Silly_Sibyl (Tommy or Tuppence)
11th Jan 2021 00:38am
There’s some really neat character stuff and turns of phrase here that show that you could probably write a great short story. I liked “zombie weddings” and the allusion to a padded cell.

The piece needs checking for grammar as there are numerous issues with missing full stops and wrong forms of words (“they’re”/“their”), so I suggest downloading Grammarly, which is a free and easy tool for detecting such mistakes.

Re: Re. legned proof
Zazzles (Broom)
11th Jan 2021 1:27am
Excellent advice Silly, i will have a look at this tomorrow and fix the grammar errors. thanks for looking and commentating I appreciate your time :)
Jackie

Read poems by Zazzles
Re. legned proof
goldenmyst
- Edited 11th Jan 2021 4:53am
11th Jan 2021 4:52am
This had my rapt attention from start to finish. You painted the man and then the woman with delicate brushstrokes of characterization that created a vivid and potent image of this soldier who finds love. This was riveting in its sheer emotional power to grip me as I read with the strength that only a writer of your caliber can.

Re: Re. legned proof
Zazzles (Broom)
11th Jan 2021 10:39pm
Hello John happy day to you 😊🎈
Yes this is intense it is a collaboration
From a few years back. I took it down cause it was collecting dust .. I saw it recently in a pdf and decided to post it again. Thanks for taking the time to write such a thoughtful and detailed comment I always enjoy these the best , right we all do ♥️
Your friend and sister in ink
Jackie 🤗