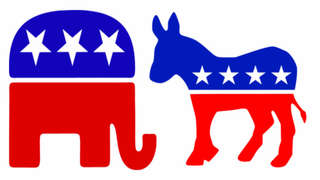 Used to be shackled to the whims & hymns of other stations
Many things weren't adding up, so I changed the equations
Assimilation's a tune I'm no longer willing to hear
I now dance to the beat of my own drum as I steer

If it's better to give than to get, why are projects in shambles?
Were they blowing smoke up our ass when writing the preamble?
Were words just rambled without intent to implement?
Does the government give a damn if you can't pay your rent?

Dollars and cents represent prosperity all around
Forget giving recompense to those you've pushed down
Does that sound about right for the mentality of the masses?
Following in line with the might of elephants & asses

Written by da_poetic-edifier (Damon)
Published 4th Jan 2021
Like This?
Poems by Author
Comment
#freedom #greed #LifeStruggles #politics #poverty
All writing remains the property of the author. Don't use it for any purpose without their permission.
likes 7   reading list entries 3
comments 8   reads 106

Re. Elephants & Asses
I_IS_ME
4th Jan 2021 11:46pm
This is a super tight piece dude, We are tired of of freaking politics and politicians currently. We can only take so much lying at one time. But you penned a great piece here pointing things out

Re. Elephants & Asses
wallyroo92
8th Jan 2021 00:45am
Damon, your flow and rhyme totally rocks this piece. The two party system hasn't really worked and it's creating an even bigger divide in these current times. There is so much corruption everywhere it's really difficult to find true decent folks who want to work to fix it.  I believe greed has taken over capitalism  because if it doesn't make money, it doesn't make sense.

Read poems by da_poetic-edifier
Re. Elephants & Asses
FATBOY300PLUS
9th Jan 2021 6:56am
Drop the mike
Let the curtains fall
Sir Damon, you,
Have said it all