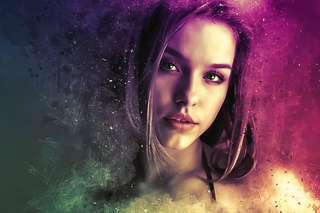 The woman had just finished up opening her antique store on State Street that early Saturday morning in late July. She was prone to rise early most days and today was no exception. Just as she was unlocking the front door she heard the door knob turning sound and was hit on the head by the wooden door as it swung towards her. It was odd that a customer should arrive this early as it was only half past six o'clock but she put on a cheerful smile and backed away from the door.
Suddenly, a man dressed all in black except for the white cloth she saw covering all of his face except for his piercing blue eyes. Her jaw dropped as the man pulled out a pistol from inside his coat and pointed it directly at her face.
"There's no need to say good morning," he said in a deep moonstone. "It's not going to be a very good morning for you."

She froze in her spot realizing the day she had feared often in the past had just arrived. She was about to be robbed. She knew she was going to have to stay calm if  she was going to survive the situation. Luckily, she was well prepared for just this very thing. She thought of her father then remembering his words to her. He had told her that if she ever was in the position of being robbed her top priority was to remain calm. She would need a clear head in order to outsmart her robber. He said that it was uncommon for a woman to outsmart one but that it could be done if she showed no fear and thought as fast as possible.

The man then ordered her to go behind the desk and open the cash register. She obeyed him,

"I want you to take out all of the bills and place them place on the desk top.  "Do it quickly, " he urged her then added, "No alarms, no resisting and I might let you live."

She was infront of the register now doing just  as she was ordered to do. The silent alarm on the floor beneath the desk just inches from her right foot. She thought of setting it off. She knew that she had to do it but without the robber noticing. She moved her foot a little closer to the button keeping her upper body as still as she could. She reminded herself of what her father had taught her. He said if she thought she was going to be raped and murdered that she should get personal with the man. Try flirting with him and to really play it up as you feed his ego. Give it a good stroking. Did she have the nerve to do it? I have to try she told herself moving her foot next to the alarm.
"You don't have to hurt me," she said locking eyes with the robber her voice unusually calm, then added, "You can have the money. I don't care about it. Take it all. You can even have some of the antiques if you want. I don't mind."  She watched as the man reached over the desk, scooped up the money and thrust it into his coat pocket. She locked eyes with him, shot him her best smile and then moved her eyes up and down his body making sure that he noticed. Her father's words ran through her mind once again. He said do the unexpected. Make him feel like he's human. Do whatever it takes to catch him off guard.

"What I want you to do is shut up and take your clothes off."
"You don't need to rape a woman when she's willing, I'll have sex with you now. We can do it on the desk." He gave her an odd look and then shook his head in disbelief.
"You're sporting me now. Aren't you?"
"No , nott at all," she replied as she began unbuttoning her blouse, giving him an adoring look. "It only took me seconds to fall in love with your eyes. You've got very sexy eyes:'

"Let's have some fun," she said dropping her blouse on the floor, "Come and get me," she said leaning over the desk and knocking everything but the register with one swift sweep of an arm. He stood infront of her looking completely stunned. It was then she moved her right foot ontop of the alarm and set it off. At the same time, the man pulled the cloth down from his face and grinned at her.
"Maybe, you're going to have a good morning, after all," the man said as he removed his coat.
Her stomach was in knots as she flashed him a flirty smile. Now, to stall for time, keeping him engaged until the police arrived. They were only minutes away because the station was about a mile down the street. Hurry! Please, hurry she thought to herself.
The man began moving around the left side of the desk and laid his gun down on it.   She raised one hand signalling for him to stop.
"No, wait," she said, "I want to watch you get naked first so I can admire your sexy body."Much to her surprise, he halted and took off his boots. Stunned, she breathed for the first time since the man had first intruded upon her. All of a sudden she realized that her scheme was not only working but it was going really well. Once he  removed his clothes, he stood still as she looked his body up and down.
"Aren't you going to take your clothes off too?" he asked with a boyish look on his face.
"Yes! Of course! But first I want you to turn around so I can get a good look at your backside." She grinned widely and just as the man began to follow her instructions, she caught a glimpse in the corner of one eye as the police cars were pulling up infront of the shop. Smiling, she stared at the would be robber who stood before her buck naked except for the white cloth that was still hanging from his neck.
"Perfect!" She whispered as she leaned down and grabbed up the gun. "Just perfect!"

Written by faithmairee (Faith Elizabeth Brigham)
Published 3rd Nov 2020
Like This?
Poems by Author
Author's Note
The thing you should always do is leave your lust at home before you go and try to rob some place.
Comment
#courage #fear #mystery #sexy #strength
All writing remains the property of the author. Don't use it for any purpose without their permission.
likes 2   reading list entries 0
comments 4   reads 164
Commenting Preference:
The author encourages honest critique.
Re. An Uncommon Woman
LilDragonFly
3rd Nov 2020 8:53am
Nice engaging write ... I could feel the suspense ...

Re: Re. An Uncommon Woman
faithmairee (Faith Elizabeth Brigham)
3rd Nov 2020 9:09am
Thank you so much, Lil! I'm happy that you thought so.

Read poems by faithmairee
Re. An Uncommon Woman
TheOralizer
3rd Nov 2020 1:11pm
Samson always falls for Deliah. Great chapter for a novel...perhaps she will or will not shoot...Hugs and peace. oral