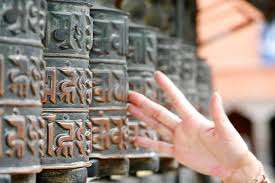 
who are thou, stranger..


(marching steadfast
in the front, with some
known crowd.. & with yet
another stranger as me.. )

accompany me
without any

yes, the link, that
once lay all over

now, doesn’t~ does
it? exists anywhere...


amongst these many tiny scurrying
jigsaw brokeness of an archipelago

afloat aloud in a stricken quietude...
in quite an unsaid Van der Waals~ forcing
intimacy.. yet their stigmatic unsticking
f(r)ictionally grimacing in-betweens

leading us...  unto until the
Summit… a burst of intense fireball
dawning red sunlight bleed these lotusy
eyeballs.. in an awakening revelation
of an intermeshing web of merging
dreamery to this Absolute Truth…
through this first fimble crop of hazy
morning memories weaving a sturdy

bridging tightrope in search of the
aligning destiny that treads through
its forming self.. in births & deaths


wholly to the sedimental breakdown
liberation to the holy nothing~ nowhere

Commenting Preference:
The author encourages honest critique.
Re. ~The Pilgrim
buddhakitty
24th Oct 2020 7:28pm
Absolutely love the images painted in this one, uma.

Re. ~The Pilgrim
LunaGreyhawk
24th Oct 2020 10:27pm
Your poems are always so rich and satisfying; a full meal with all the fixings. Beautiful, Uma 💜.

Re. ~The Pilgrim
nomoth
24th Oct 2020 10:57pm
a scold,  a  dripping wet  cloth cooling  the brow with  painting and music and mosaic dancing between

bridging tightrope in search of the
aligning destiny that treads through
its forming self..

these knots in the tapestry, some/any faith in mistakes and their transparency , we train and  leave the worms of our lives to wonder.

Re. ~The Pilgrim
DanielChristensen (The Fire Elemental)
25th Oct 2020 1:08am
Stunning, blazing earthly divinity Uma. I drink you in like music.

Re. ~The Pilgrim
JohnnyBlaze
25th Oct 2020 10:11am
I feel like I just went on one of those Travel Channel expeditions into the unknown with Josh Gates. Usually he gets there in a shitty rental car. This was more of a magic carpet ride.

Re. ~The Pilgrim
Ahavati
25th Oct 2020 4:12pm
This entire offering is no less than Spiritually clad in genuine devotion; however, this stanza here. . .

That stanza is absolutely divine in both imagery and essence.  I was literally there.

Much love to you my Sweet Friend.

Re. ~The Pilgrim
Strangeways_Rob
26th Oct 2020 7:50pm
There was me thinking Van der Waals was a Dutch footballer! I will let the lustre of the above comments shine as my own reflections on your words. Love me xx