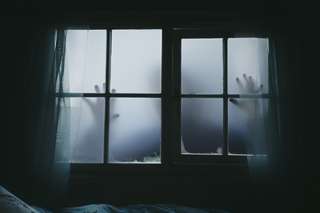 On A Visit To Salem, Massachusetts

One of my fondest memories comes from a visit to Salem, Massachusetts in October of 1984. Me and my ex-husband were visiting his only sister who lived in Bedford. On that chilly fall afternoon we decided to visit the witch house in Salem, where the witch trials took place in 1862-1863.

I was very excited about the trip mainly because the witch trials had always fascinated me. There were few visitors there that day but none of us cared about that. We followed the tour guide, who was property dressed for the times into the witch house. From the moment he began speaking, the three of us started to giggle at the sound of his voice. It was the sing song quality that cracked us up.

I remember looking the place over and getting an overall eerie feeling seeing the fixtures on the wall and the dilapidated furniture. Still the giggling continued to the point I half expected us to get thrown out of there for being disruptive. But we managed, somehow, to make it through to the end of the tour.

We were still giggling as we climbed into our car to leave, my husband at the wheel with his sister in the passenger seat and me in the back.
It was then that things turned a bit more serious. My husband's sister asked where we would like to go for dinner.

"Let's go to Mario's," I suggested.
"How do you know about Mario's?" she said whirling her head back at me with a stunned look on her face.
"I dunno know, " I said this being my first time ever being in Salem, Massachusetts. "I must have seen it advertised on tv or something."
"That's impossible," she shot back "They never advertise on television."
"Then perhaps I saw the restaurant on a post card in one of the stores here.
"That couldn't have happened. It's not on post cards."
"Well, we are here in Salem and we must have driven by it." I then went on to describe the exterior of the restaurant to them all of the way down to the white shutters.
"It never happened," she insisted, "we're nowhere near the restaurant. But we are going there because I want you to see what you just described. So off to Mario's we went.

I remember thinking how odd it was that back of the restaurant faced the street. I knew then that if we had driven by the restaurant, I would not have been able to see what the entrance looked like anyway. We pulled around back and all three of our mouths fell open. The restaurant looked exactly how I described it to them earlier.

Once inside we were led to a table by the hostess where we sat down and ordered a pizza. I remember the atmosphere seeming so familiar even though this was the first time I had ever been there. We talked about our trip to the witch house and how badly we had behaved. The pizza arrived in due time and we sat there devouring it in between giggling over our visit to the witch house.

Written by faithmairee (Faith Elizabeth Brigham)
Published 14th Oct 2020
Like This?
Poems by Author
Author's Note
This is a true story, however, unexplainable in part.
Comment
#food #witches
All writing remains the property of the author. Don't use it for any purpose without their permission.
likes 1   reading list entries 0
comments 2   reads 96
Commenting Preference:
The author encourages honest critique.
Re. On A Visit To Salem, Massachusetts
Honoria
14th Oct 2020 9:06am
Dear F,

Spooky! I have to say I so enjoyed all the elements of the story. The visit as a family, the giggling at the tour guide, the venue and especially the bewitching description of the restaurant you never heard of already known to you. Halloween perfection! H🌷

Thank you so much for your wonderful remarks. You made my heart smile!