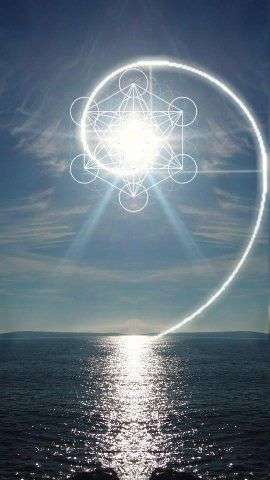 Sphere, fill the emptiness,
emptiness, defined by sphere
inside's being outside, hence
you measure it through surfaces

Vesica Piscis! So symmetrical
Incision's straight line, circle is above
so the force mine rather thrynical
is launching on it's path, now GO!

the endless twists
they end in an equator
creation's models in a bliss
are actuated in a generator.

the innermost point inside the circle
contains the grain of Po; the vortex is itself;
a light-driven Voice vibrates, a whilpool
the Shores of Heaven protects, or, life's Well.

a degree of three hundred, sixty, dot
when it departs as to the completion
the pergel delinates the plate, and it ought
define Deus Ex Machina's perfection.

and all directions lead
to the middle's core, its heart
shapes the X, so deep
the Trinity's been trinitized; play harp!

in the fibonacci helix run, oh, you,
approximation mathematically asymptotic,
the paradox of Non-existance true
you overcome with divisions so hypnotic.

with the curves of a shell so round
inside of which the square's essence
creates, secondly, an egg, its sound,
then fruit of life, so effervescent.

the one true form of Elohim
uncompleted circles on the edges
they get enclosed as to encode so firm
the secrecy of God So mystical, it pledges!

The Cube gives birth to transcendence
it emanates the resonance of Mother Craft
in dimensions and one's personal contents
the forms mossaics assort on lit shafts.

Here comes He: Metatron.
A guardian and such a father.
AlltheNothing is a Home
He'll protect through knowledge gathered.

Directing magical force of the hair
in descent so profound he bore depth
of the spiritual that in the Eastern air
we felt in songs of ancience's untold breath.

The exoticism of jungle pyramids humid
and the force in his mantle so alchemic
with a staff and stones he's a druid
a Sovereign of Cosmic Law divinely strategic.

He shall observe so concentrated
our mission so eternally humane
with His Spirit Godly and Untainted
the Christic Unified Cell of Our Plane.

That we surpsessed in our women
the cube's dodecaedron there, right, on top
in the centre it rotates and brimming
our fates inside develop; so they trumpet, throb

so happy - that they are alive!

The meaning, hidden in the Ark device
Don't you dare, Metatron, divulge!

Don't you ever tell me secrets!

I do love you, always yours! '

The mistery does sway, oh hide it, bleakness,

and I shall never interrupt its chorus!

****
This is my translation of my poem Metatron written originally in Bulgarian language, my native tongue.

Written by AaronBraveHeart
Published 13th Sep 2020 | Edited 14th Sep 2020
Like This?
Poems by Author
Comment
#dreams #magic #mystery #philosophical #spiritual
All writing remains the property of the author. Don't use it for any purpose without their permission.
likes 2   reading list entries 1
comments 11   reads 84

Commenting Preference:
The author encourages honest critique.
Re. Metatron
Ahavati
13th Sep 2020 8:56pm
This is mindblowing, absolutely.  I will have to read this multiple times to allow it to fully absorb and deliver its message, but thank you so much for sharing.

Re: Re. Metatron
AaronBraveHeart
13th Sep 2020 8:59pm
I wrote it on purpose. I read a lot about Creation's mechanism and geometrical manifestation, and I summarised all that I know about it here, it creates the Cube of Metatron. You can see it visually here:
https://youtu.be/ONZX9GeeygY
https://i.servimg.com/u/f48/19/98/30/30/94927010.jpg
https://ibb.co/K0DQdDg
https://ibb.co/KWmSwTR

Read poems by AaronBraveHeart
Re: Re. Metatron
Ahavati
13th Sep 2020 9:01pm
Thanks! Will check it out!

Let's start with the fact that everything is one big Nothing. It is a Potential that contains infinite knowledge that bears the desire to experience more of itself.

The CREATOR (I do not specify it with human characteristics) first shoots a ray of consciousness into the Great Void. First forward, then backward, then left and right, up and down, at equal distances. This is how spatial directions are defined. Then the space is limited by joining the ends of the six rays. Thus a square was formed, around the center of consciousness, and from it they sent a ray upwards, forming a pyramid. Followed by a ray downwards to form another pyramid; these two pyramids with a common base form an octahedron. This makes it possible for the one existing SPIRIT to come out of the created figure, which is an object. THE SPIRIT can come out of it and move, return and have a center, as well as rotate the figure in a certain direction or become its center, causing it to move around the SPIRIT. So as to create a sphere, the figure had to rotate around one of the axes (forward-backward, left-right, up-down) - regardless of which and in what direction. Then it had to design another sphere, the same as the first one, so that consciousness could come out to the surface; coming to the surface, it creates another octahedron, rotates it around the three axes and creates a new sphere the size of the first, creating Vesica Piscis at their intersection, the newly obtained sector resembling a line seen from the front and a circle from the top, inscribed in the spheres themselves.

The first Creation created the sphere.

The first movement creates Vesica Piscis, the basis of Light.

The second motion - the basic geometric model of the stellar tetrahedron - thanks to the mutual penetration of the three spheres.

According to the instructions, the Spirit must move toward what has just been created. This is the only indication.

The first form is Torus. If you rotate the model of Creation around its middle axis, a shape is formed that resembles a pretzel with an infinitesimal hole in the middle; but the manure is unique because it wraps around itself from the outside in, and from the inside out.

The spiral of the Golden Section has neither a beginning nor an end, which is a problem for life. Because of this, we have done something that is not a spiral of the golden section, but with its rapid approach to it, there is a barely noticeable difference. This is the asymptotic approximation. The real number is never reached, but after a certain number of divisions the difference cannot be understood.

The second figure after Creation is the Egg of Life - and the Third Figure is the Fruit of Life. These are three-dimensional figures. The egg of life is composed of three-dimensional spheres, the centers of which are connected to form a cube. With the third rotation, the Fruit of Life, an interconnection is made, which is like a crescent connecting the daisy petals - in the center of the innermost sphere it can be seen most clearly. Then circles are added, which close the unfinished circles on the outer edges of the figure; because otherwise, if the previous series of circles is simply completed, the secret of life will be revealed. Ie where a symmetrical sequence of circles occurs, these are placed in such a way as to "clog" the sequence.

There are 13 ways that on these 13 circles (female) male energy can be imposed, straight lines. If these 13 ways come together, plus the Egg of Life and torus, the whole being is created, along with the Fruit of Life.


This also forms the Cube of Metatron, in which Plato's bodies are arranged - a stellar tetrahedron (fire), an octahedron (air), an icosahedron (water) and a pentagonal deodecahedron (prana / ether), and the cube is earth. Above is the Sphere of Emptiness, below is the Octahedron - the Air, connected by the middle creative column of the child. In the initial process of creation, the air comes out of the air - the Octahedron, to the sphere - emptiness, and this process takes place as it flows through the middle column of the child. On the left is the male energy - Fire and Earth, on the right - the female - ether and water. The right side is connected with the Christ consciousness, the unity. First the left side is created, and then balance is achieved with the right.

Deus X Makina marks the act of lowering an actor into the role of god through a tap on stage to put an end to a hopeless situation. Personally, this "machine" itself reminds me of the trinity - the point from which the crane begins, the point (peak) from which the rope descends and its point of contact with the legs.

X is like the intersection to the center of creation, and I made a little flirtation with the fact that in English it is in the center of Deux X Machina.

The trinity, in my opinion, determines the wholeness and at the same time the distinction of all that is. Let's say that the three components, in one person, are Potential, Manifestation and Movement.

ps - i wil check out your recommendation :)

Read poems by AaronBraveHeart
Re: Re. Metatron
AaronBraveHeart
13th Sep 2020 9:39pm
sorry if the explanation is overwhelming. the figures in the pictures follow the text. I used them to get the concept, and it took a while. The video shows exactly what I wrote, in linear subsequence, so if you watch the video, it's quite enough tbh

Read poems by AaronBraveHeart
Re: Re. Metatron
Ahavati
13th Sep 2020 9:42pm
No no! I enjoyed reading it. I will just have to digest slowly. I actually have a poem here somewhere. . .I'll have to find it for you. . .

Re: Re. Metatron
AaronBraveHeart
13th Sep 2020 9:43pm
Looking forward to reading it

Read poems by AaronBraveHeart
Re: Re. Metatron
Ahavati
13th Sep 2020 9:44pm
I actually enjoyed looking at the diagrams. I love old books and that one fascinated me, despite not being able to read in Bulgarian, did you say?

Re: Re. Metatron
AaronBraveHeart
13th Sep 2020 9:46pm
Yeah bulgarian i guess the original is English, drunwalo melchizedek is the author the flower of life the title if translated correctly back to the original.

Read poems by AaronBraveHeart
Re. Metatron
Jezkeebs
20th Sep 2020 9:37pm
Love the sacred geometry and you poem gives it the epic treatment it deserves... thanks