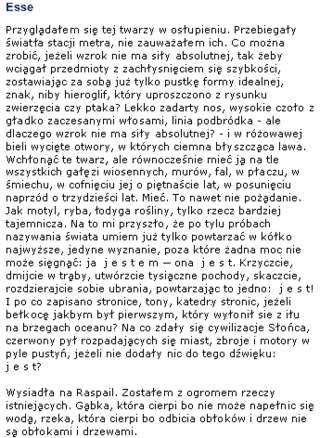 ‘ESSE’ ~The Hinges Has to Cling On Tight... For The Flung Wide-Open Doors Of Freedom: On Essential Existentialism

I looked at that face, dumbfounded. The lights of métro stations flew by; I didn’t notice them. What can be done, if our sight lacks absolute power to devour objects ecstatically, in an instant, leaving nothing more than the void of an ideal form, a sign like a hieroglyph simplified from the drawing of an animal or bird? A slightly snub nose, a high brow with sleekly brushed-back hair, the line of the chin – but why isn’t the power of sight absolute? – and in a whiteness tinged with pink two sculpted holes, containing a dark, lustrous lava. To absorb that face but to have it simultaneously against the background of all spring boughs, walls, waves, in its weeping, its laughter, moving it back fifteen years, or ahead thirty. To have. It is not even a desire. Like a butterfly, a fish, the stem of a plant, only more mysterious. And so it befell me that after so many attempts at naming the world, I am able only to repeat, harping on one string, the highest, the unique avowal beyond which no power can attain: I am, she is. Shout, blow the trumpets, make thousands-strong marches, leap, rend your clothing, repeating only: is!


idee'- fixed, like
a possessed aficionado...
I drained unto her
...spaced out
timelessly...

all others... consume...
in a blackout... to their
calling black holes..

…channelling in visions,
balloon the bloody tangled veins
to an exploding streamline.. as to
the gripping electric ganglionic
st(r)ings… of a primal drumming
bosom in banging echoes...

the grand scheme of things! oh, not a thing...

hungering visions... how
deficiently dangles in the inedible
lies... of miraging librations
of skeletal Truth, in an
afloat surreal succulence

a hyperbolic graphic of her
...but, why these facultative visions
just be not an obstinate Truth?

and, a gauzy reticulating
arteries are her georgette
cheeks, with twin~ tinkling
starry anime constellatory
flares...

to fully digest
such beatific panorama over
varifold Nature in its emoting
Times… either forward or
backward, is quite rapturously
a mind-boggling impossibility...

to possess...
is unimaginable, like a blade
of grass, a ladybird
...an enigma

..as droplets over lotus leaves...


as she left at Raspail, I was
haplessly drowning in the apparitional
sea of lavishing apparencies... ...thrown
out in simultaneity... a fish in throes...
breathing the Skies of One Truth

Commenting Preference:
The author encourages honest critique.
Re. ‘ESSE’ ~The Hinges Has to Cling On Tight... For The Flung Wide-Ope
buddhakitty
6th Sep 2020 5:39pm
Existentialism at it's best. The constant question of life, " are we so busy looking for our life that we miss the experience of living our life"(that's my take).
Superior write uma.

hugs and blessed be to you,
buddhakitty.

Re: Re. ‘ESSE’ ~The Hinges Has to Cling On Tight... For The Flung Wide
summultima (uma)
6th Sep 2020 8:53pm
Getting this super nod from you, my superior existential & adored ev poet.. is much heartening & inspiring ..Gratitudes , Light & Love dear BK:)

Read poems by summultima
Re. ‘ESSE’ ~The Hinges Has to Cling On Tight... For The Flung Wide-Ope
Ahavati
6th Sep 2020 10:57pm
Holy heck. I feel like one of those people who cover their face with one hand while slithering out of a poetry reading before I have to go on behind you. This was breathtaking, Uma. So philosophical in nature, and yet, so loving and gentle.  Possession is not in the vocabulary of Love.

Re. ‘ESSE’ ~The Hinges Has to Cling On Tight... For The Flung Wide-Ope
badmalthus (Harry Rout)
6th Sep 2020 11:24pm
Existential interpretation at its highest peak, uma...the "Overwoman" looking down from high, offering love and kindness...but not from pity...but inner-strength, Beautiful my friend.
Peace...Harry

Re. ‘ESSE’ ~The Hinges Has to Cling On Tight... For The Flung Wide-Ope
DanielChristensen (The Fire Elemental)
7th Sep 2020 4:35am
💖🎶🙏 Astounding. My heart pounded like a leaping fish throws itself into the sky and revels in a blazing new world for just a moment that reveals a strand of eternity.