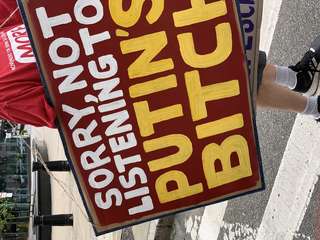 “Slavery was never abolished, it was only extended to include all colors” ~ Charles Bukowski

but the why is burning red
white
and blue black.

I see the new plantation as he did
Her womb is fertile.
Ripe with money.

My last name, “Heyward”
is that of my family’s slave master,
Thomas Heyward.

a co-signer of the Declaration of Independence and notorious slave owner in South Carolina.

I’m a bastard of America’s greatest oxymoron,
men who wrote of freedom but kept my mother’s mothers as concubines.

or we get called for a fuckin’
birthing more bastards
cause the work is a plenty
Amazon is always hiring.

I don’t suppose Bukowski would have Facebook or the Gram
[a gram, maybe]

Because here I lie at 2:33 AM
tapping out his birthday card on my iPhone
while trying to wean my three year old off McDonald’s tit.

while the sheriff and his kind
stand at the ready.
badges and name tags covered
with black tape
not white hoods.

Bukowski was right.
Because when the sheriff and his men
swing their clubs
They don’t care who.

Black boys with rocks shouting
“Fuck the police!”
An old white man who didn’t move fast enough
as the sheriff marched through
and had his head bounce off the ground.

I haven’t caught my beating,
yet.

Probably’ll be about the same
as when I spitting up blood
in the hospital for two nights
coughing and hacking [coronavirus]
much like Bukowski at his end.

damning the world
he couldn’t change.

Written by LobodeSanPedro
Published 4th Sep 2020
Like This?
Poems by Author
Author's Note
Charles Bukowski Birthday competition
Comment
#corruption #inequality #poverty #racism
All writing remains the property of the author. Don't use it for any purpose without their permission.
likes 6   reading list entries 3
comments 0   reads 332