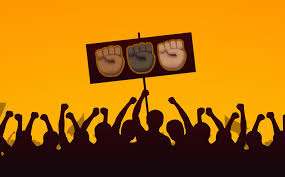 Give us war or give us peace
Does it matter who owns the lands our feet now lease
We greet with our eyes
Behind veils we mentally bow to our government’s perpetuated propaganda and wicked lies
We raise our fist to laws mandated to renounce equal rights, visions of love, a drought here on earth not deemed a necessity from above

Bullets aimed to kill without a worry or care
Colliding with the ‘bombs bursting in air’
My Fifth Amendment means nothing to me in the dark
A badge, a Taser, point blank range gunshots in the back, BLM igniting the wick, as souls is lowered, eulogies delivered from the heart

Too much blood has seeped from our Moorish pigmentation, the blessed seeds from man’s groin
Cursed by depopulation annihilation
Is this the plan of God’s will for our lineage to be
No future hope to believe
Inferior complexity labeled from the rock of the cradle to the mean streets

Yakub and his scientific cyborg equation, lighter, weaker manmade cloned
Artificial intelligence rules our destinies, at the tap of fingers, the body is presence, the intellect too far gone
Entangled souls under the sheets, but never the authentic components to give unto our shades of variation skin tones

The black man, stagnation of uplifting the black woman
The Bible, The Torah, The Holy Quran who we adopt its theologies, whoever saw discord, disunity coming
Two sides of political Hell now has Satan and Lucifer running
We pray on our knees, we stand, unfavorable, handcuffed
Believing that old constitution promise, my skin tone never signed, In God We trust
Marching in union, chanting to be free, uncivil consequences sometime is a must

Let’s gather the facts, before we rush to judgment
Army in riot gear, protesters pushed back, a teenager with a slinging assault rifle, murders, sleeps in comfort in his own home,  overlooked due to privilege circumvent
Yet, we came from the back of the bus
We now sit in the front, boxed in by sociality’s lynchings  in black robes reading a docket, claimed to be a disrupt
Militant groups, KKK influential on weakened minds
The race ties have been severed
The definition of peace has sailed, regained with the possibility of never

Written by CherryLoveNotes
Published 2nd Sep 2020
Like This?
Poems by Author
Comment
#honesty #men #philosophical #racism #TruthOfLife
All writing remains the property of the author. Don't use it for any purpose without their permission.
likes 4   reading list entries 2
comments 1   reads 117