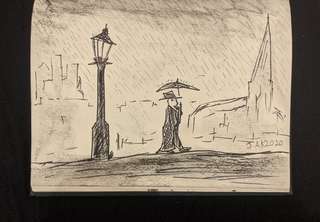 There once was a man so hateful he beat himself up when he was left alone. I looked at the him in the corner of the living room, he was frothing at the mouth like Hitler giving a speech, only he was bald and sat in his underpants. It was hard to see anything but hate in that spitting degenerate. In life you will have to live with people you despise, it was useless to get angry about it. The TV pumped hate into his head, and he spat it back at the TV. It was best just to creep past the living room door and avoid all conversation with the pitiful clown.
It was raining rats and crows that grim city rain that oozes rather than falls. I had made it halfway to the heath before it fell. It fell so hard it ran down my back and into my shoes. My shoes were filled as if I had walked into a river. The city rain was heavy with metallic pollution. My skin began to burn, my eyes grew sore and I felt my lungs working harder than before. I was caught by the rain and I was rusting up. Only the metal man survives this life. The cold-blooded machine is king. Those with warm blood and human flesh rot away below trying to feel love in a world of pain.
All the kind hearted were easily into self-pity by the ruthless swine that calls itself family, blood family. The noblest thing a human can do is kept their family laughing. They can’t do better than that unless they are medical professionals with the cure. I was doomed to walk the earth a metal man, a machine, but even machines rust in the rain.
There was no escaping the burning rain. It fell as if the sea had been lifted above and poured over the city. The TV was for suckers, so was the popular culture people protect with there life. Do you want to be a sheep to a wolf in Shepard’s clothing, because that’s what we are? If you are happy to be a sheep say Baa! If you want to be free say nothing and calm the fuck down. You are not the only one who has seen the beauty of it all and had it taken away.
They were always there, and you know it, you were always too timid to enjoy yourself at the party. Then you grew up and could no longer go back, like Peter Pan at the window of his home. The only way was forward and into the spiritual void, No religion, no heart, no home, no science, just hate. Humanity losses nothing when the hateful pass away. Just like the corporate conscience, people die for your money, you take the money and people die. Why should you care for the millions who die so that skyscraper syndicates can rule the world? Keep your mouth shut and get on with your shitty life at least you’re not dead. At least you’re not dead. If you’re reading this you must be alive.
My skin was washed by the acid rain and I went back to the prison I called home. At least if I wanted to leave I could. I just didn’t have anywhere else to go. I could run out into the wilderness and I reckon I’d survive about a week before I came snivelling back. I could eat berries until winter, and fish the toxic river and pick the scraps out of bins like everyone else does. I could beg for money and then I could become a member of the night club. The open air night club that is always open for business, the music plays as the cars roll by broken by the sirens of the police and the barking of a dog, someone’s screaming, someone’s laughing and the people just walk by hoping it will all go away. I wouldn’t last five minutes out there. Even if I am made of metal, that’s molten magma out there, it melts everything into one. People fry alive or get used to the heat. Then winter comes, a merciless predator with razor ice teeth. Best just to live with household Nazis. I am not going to that life unless they through me out.

Written by Frustrated_prole
Published 28th Aug 2020
Like This?
Poems by Author
Comment
#confessional #rain
All writing remains the property of the author. Don't use it for any purpose without their permission.
likes 0   reading list entries 0
comments 0   reads 51
Commenting Preference:
The author encourages honest critique.