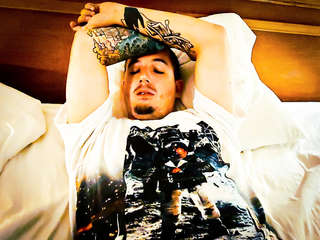 Navigator To The Metaphorical Gods Of The Dead

Bearing to rising tides the windy fog evaporating towards us, too late long too late,
It is upon us now more than ever to find the mother lovin truth of hidden fates,

Rough seas as far as the eye can see reflected back in my eye mirrored to me,
So what is the truth of what I'm really seeing beyond any reason for this reality,

Dreams of colors so lucid it destroys the other minds that had attempted,
Dead men walking do you see them in the dark shadow corners of the night,

The multiverse has me lost every second I think about it, not here but everywhere,
Only for daring fanatics, maybe for the suicidal, how many more we have to lose?

Human minds can't comprehend how far pluto is, nor its orbit around our solar system,
Nor can it stop all the minds in the world from committing the same god damn thing over n over.

Sell me solutions sure enough that I won't have to ask if any of this is even real,
Packin with the steal in question seal the deal with a suicide pack u go 1st,

Psyche! Poor Thanatos his gentle touch unlike his brother's death toting Erenys,
From another mother both disowned the other over for their furious nothingness.

War of the realms,
Where ur soul goes,
Sliced up and flayed,
AND I ROSE FROM THE DEAD!

Written by glfinding (Steven Delauder)
Published 4th Jul 2020
Like This?
Poems by Author
Comment
#dark #God #sacrifice #war
All writing remains the property of the author. Don't use it for any purpose without their permission.
likes 2   reading list entries 2
comments 2   reads 106

Commenting Preference:
The author is looking for friendly feedback.
Re. Navigator To The Metaphorical Gods Of The Dead
EdibleWords
5th Jul 2020 10:00pm
Very cool.🙏😎🔥

Re: Re. Navigator To The Metaphorical Gods Of The Dead
glfinding (Steven Delauder)
- Edited 6th Jul 2020 7:28pm
6th Jul 2020 7:27pm
I wish I knew where in my mind i  come up with this stuff. I think deeply and thank you deeply for reading i do it for myself but mainly for the underground.  <3