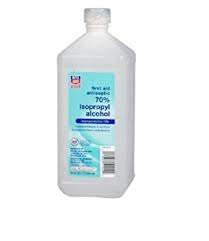 She was unable to get the pills and she did something that wasn't smart. She believed that drinking rubbing alcohol would be the same as taking the pills. She drank some and it killed her. She suffered tremendously. She didn't die immediately though. She lived for a few months and then she died. I don't know how much she drank but it was enough to end her life. It nearly ate the lining out of her stomach.

She was in a great deal of pain. At the time, she was with my cousin who was her half brother. She was saying "Help me, John! Help me!" John said that there was nothing he could do to help her. It's sad and tragic that she had to suffer and die. The moral of this story is, Never Drink Rubbing Alcohol.

Written by randyjohnson
Published 29th Jun 2020
Like This?
Poems by Author
Author's Note
It is with great sadness that I tell you that this is a true story.
Comment
#addiction #alcohol #death #nonfiction #suffering
All writing remains the property of the author. Don't use it for any purpose without their permission.
likes 0   reading list entries 0
comments 1   reads 79
Commenting Preference:
The author is looking for friendly feedback.
Re. Drinking Rubbing Alcohol
Phantom2426 (Francisco J Vera)
29th Jul 2020 4:00am
You right never drink rubbing alcohol.  Great sad poem.  Sorry for your loss.  Keep on writing