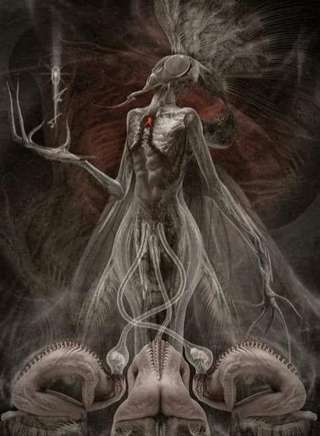 “Her sex was mystical as her body moved like casting a spell
Her moans were like honey which was erotically expelled,
“Painted red nipples danced seductively across my chest
While her inner gripping wetness kept me throbbing erect,

“Unintelligible ancient words my captures savagely spoke
Causing me to lose breath and every other minute slightly choke,
“Her sticky sex residue pierced my penis sending pain to the brain
While I was bound by scat covered silver chains,

“Blindfolded and chained I was lead deep in the Louisiana swamp
For long grueling days the journey was harsh and non-stop,
“At the final destination I was oiled and tied to a stake
As a crowd gathered around like a funeral wake,

“The adults had symbol-engraved blades and begin cutting my flesh
Urinating on the separated parts and tossing away the rest,
“After their ritual of violation I was set on fire to feel the burn
Now it was time for judgement and these amateurs to learn,

“With my inflicted pain I regenerated and created a flaming throne
Because the burning suffering made me feel right at home,
“Summoned souls prevented escape, because leaving was not a choice
As their tortured pain was used, so clearly heard was the sound of my voice,

“Before the killing get started let me tell you a story
I’ve lived a thousand years before Jesus ever preached salvation and glory,
“Feed off the massacre of the Cives Romani when Rome got annihilated
Forever cursed their souls to haunt Europe-so to heaven they will never be elevated,

“Watched the pigs of mankind wallow in their evolution of mud
Taught the Tenochca the ritual of sacrifice through the spilling of blood,
“And through blood, on my rod-is uncountable acts of virgin sex
Followed by pain and misfortune and a life that will be forever complex,

“I don’t consider myself a God or the one above all
But an ancient dark judge that will be your inevitable downfall,
“After my speech many fell to their knees wanting to serve
I killed them instantly without saying a word,

“Some ran in fear towards the nearest trees
Their beating hearts was disintegrated like bothersome fleas,
“Several could not move paralyzed with shear fright
They were transformed into powdered glass and blown into the night,

“My mystical sex mistress felt her fate and begin to plead and yell
As she became the worldwide eternal living pain of childbirth for her betrayal,
“The only one’s I let live was the young children of the cult
Whom I mind wiped and gifted with the purity of hope”.

Written by CasketSharpe
Published 5th Jun 2020
Like This?
Poems by Author
Comment
#betrayal #dark #revenge #sex
All writing remains the property of the author. Don't use it for any purpose without their permission.
likes 4   reading list entries 2
comments 6   reads 255

Re: Re. Dark Judge
CasketSharpe
5th Jun 2020 10:22pm
Had to get back into some dark fantasy writing. Thanks for taking the time to read and comment.

Read poems by CasketSharpe
Re. Dark Judge
soara (BloodRayne)
5th Jun 2020 10:43pm
Oh damn CS this is undeniably one of my favorites
I love your dark thoughts you are a master at this genre
Bravo

Re: Re. Dark Judge
CasketSharpe
7th Jun 2020 2:51am
The youth should not be punished because of their evil adults.