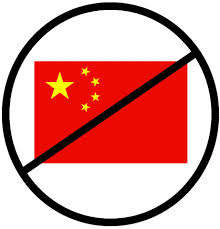 Say No To The CCP

History repeats itself, from the Holocaust – (never again) to the “war to end all wars”
Form the Maoist holocaust killing an estimated 100 million people
To the Marxist / Stalinist holocaust killing an estimated 26 million people
Form the Christian crusades to the Muslim crusades both equally brutal
This is not as simple as forgetting the past
It is the evil of mankind choosing to hide it
And deliberately ignoring it for nefarious means

Now we have the coronavirus which originated in Wuhan
But we are told calling it the Chinese virus is racist?
Did we forget German Measles or Japanese Encephalitis?
Ebola, Middle East Respiratory Syndrome, Omsk Haemorrhagic Fever
And so on. The coronavirus to me is either the Wuhan or Chinese Virus
Wither it was created and weaponised in the Wuhan lab with foreign assistance
Or it developed naturally from the bats not sold in the Wuhan wet market
Where the suspected patient zero had no connection to the market.
The viruses release was either deliberate or accidental
The evidence is unclear

What do we do with countries who deliberately flout international law?
What do we do with countries who have no concept of human rights?
As I have said Mao was responsible for 100 million deaths of his own people
How many more bodies or genocides does it take to stop our inertia
How much more ethnic cleansing is just fine with us
How many Hong Kong or Taiwanese protestors need to die?
South African apartheid was stomped all over, rightly so
We stopped doing business with them and sanctioned them into submission

And so to a suggested action plan:
Cut all political and business ties with China
Don’t buy goods or services from China
Don’t pay any debts legally owed to China
Refuse to provide goods and services to China
Refuse to collaborate on any science research projects
Do not allow Chinese student to come to our universities
Do not allow open travel to and from China
This to me seems like a reasonable punishment

Are we going to do this?
Hell No!
The almighty dollar is more important than
Espionage, concentration camps, brainwashing,
Torture, ethnic cleansing and predicted genocide
This is only acceptable in a sick and evil word
We claim we didn’t know what the Nazis were doing
With information technology and mass multimedia
We now have no excuse,……..

This is not racism I have no issue with the Chinese people. I have much love and empathy for the Chinese people. But what I do have an issue with is the murderous and evil Chinese Communist Party (CCP) and no other.
Show Less
Comment
#anger #CallToAction
All writing remains the property of the author. Don't use it for any purpose without their permission.
likes 4   reading list entries 0
comments 5   reads 132
Commenting Preference:
The author encourages honest critique.
Re. Say No To The CCP
cheesa
25th May 2020 10:01am
Good factual detailed writing

Re. Say No To The CCP
Eerie
25th May 2020 12:26pm
So much truth here, David. I’ve had to shut people down in conversation who want to rag on the Chinese people, and remind them that they are human beings living under an oppressive state. Any and all anger should be directed to the CCP. The atrocities that are being perpetrated against the Muslim people in China, while the world largely turns a blind eye, is unforgivable. Everything is about money, power and greed. We live in world operated by evil people. When will good people rise up?

Re: Re. Say No To The CCP
David_Macleod (David Macleod)
25th May 2020 5:49pm
it is so very sad that the worlds biggest population lives under such tyranny - we moan about COVID lockdown but these people have been living a lockdown for decades both by their mind and their secret police state.

How many people knew about the holocaust in Germany and sat by being silent - is this the way that it is going to be with China 2020?

spiritual people are good in theory, from all religions and persuasions it must be lead and campaigned by them.

Read poems by David_Macleod
Re: Re. Say No To The CCP
Carpe_Noctem
27th May 2020 10:35am
It's coming.
We need to vote with our dollars, or whatever paradym money will be known as. Support small local businesses.
Grass roots community level is how we resist this.

Seems they want to mass Democide us Dave