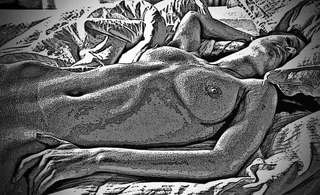 I’m Michael, 36 years of age, and unemployed. My name means archangel. I'm not sure why my parents, both dead now, gave me that name. Friends gave me the name of Azrail, meaning angel of death, after one particular fight during the Iraq War in 2003. At age 19, I was an efficient killer and never felt any guilt while over there. I viewed it as passing judgment on the enemy’s ideas. Killing was necessary for their good and the good of my buddies.

Unfortunately, guilt followed me home. I often saw the faces and bodies of those I’d killed in combat. Shortly after the war, my father left me a fortune, and I’m comfortable, even though unable to hold a job because of my PTSD. I went to war a devout Christian and honor student, but returned home a basket case. My life was mere existence and drinking through the days, followed by fitful, sleepless nights.

Recently I woke from a deep sleep and saw a dark cloud in my room. From within, came a raspy voice.

“I am Satan, and God has favored you by assigning you a sacred task on his behalf.”

He explained that the task was given to him because of its evil nature. I hadn’t realized that God and Satan cooperated on some things, but I didn’t question.

Satan gave me unique power to judge what he called the divine intent of others. This was the ability to see where their life was headed. He told me it was my sacred duty to judge one human on the seventh day of each week.

He gave me gifts to use in this task. I received charm, a keen sense of humor, and an aura that would attract those of the opposite sex. If a girl was attracted to me, and her soul’s destiny was already determined, I was to let her live since death would be of no benefit to her soul’s future. If her soul still possessed elements of innocence and the possibility of redemption, I was to end her life, setting her soul free from her destiny, and ushering her into eternal rest.

I asked Satan how I would judge. He said I would learn of each woman’s divine intent during sex with her. If my pleasure with her was moderate, I was to let her live. Her destiny was set. If my pleasure was intense, she was to die, saving her from future damnation.

I said I worried that I wouldn’t be able to judge. The dark cloud laughed, “Oh, you’ll be able to tell. I’ve given you gifts that will reveal themselves during the act of judgment.” Then the cloud was gone.

That was on a Thursday. The experience left me shaken. I spent Friday and Saturday trying not to think about it. On Sunday evening, I visited the same bar I always went to on Sundays.

“Hi, would you like a beer?” The bartender smiled and said, “I’m Tiffany, and I’m new.”

“What happened to Joe?” I said. He’d been there for a couple of years, and I enjoyed our talks.

“He moved to a new bar. Said it was better pay and closer to home. Don’t worry, because he got me trained and listed you as one of his best customers.”

“Best customer as in what? Best drunk?”

She tossed her hair and cocked her head sassily, “Maybe. He didn’t specify.”

“Are you old enough to work here?”

“Why yes I am! I’m 24, a student, and doing this to make a little extra cash.” Tiffany was about 5’4”, and 120 pounds was my guess. I couldn’t take my eyes off of her breasts in that red low cut top. Her jeans hugged her slender legs.

The place was quiet, so she and I chatted it up. I couldn’t believe she thought everything I said was clever. While we continued talking, I started thinking of the cloud. Was it happening?

The place got busy, and I watched her work. I noticed her beauty, freshness, and smile. Several guys tried to hold her attention, but she kept coming back to me and visiting when things slowed down. Between customers, she told me about her breakups, her college classes, her parents, sisters, and future plans. She told me she’d been through a rough relationship and wondered if she’d ever love again.

I was puzzled by this and said, “What have you got planned?”

“I was hoping you’d tell me,” she said as she bit her lip and touched my arm.

She tilted her head, smiled and said, “You’ve had a few too many, but just so you know, my name means seeing God.”

I left and returned at the appointed time and that was how this 24-year old beauty ended up in my apartment at 9:15.

God, she was beautiful, funny, and sweet
What was in me that she wanted to see
I knew my task, judgment to pass
What was the future of her beautiful ass?

I hoped that she’d be disappointing
Showing no signs of divine anointing
But she wasted no time, saying, “It’s my bedtime.”
We tangled together in our pleasurable crime

Of Satan’s gifts I would soon learn
My large cock began to churn
I’d never felt such elation at hands of future damnation
I saw that her youthful soul would someday burn
Was this the answer that I was to learn?

I knew right then what I had to do
My knife was sharp and ready to use
I thrust it in lifting her body toward heaven
Pierced deep in her heart, her body now leaven

Her shoulders rolled forward in a painful arc
Beautifully playing her desperate part
She looked up in horror and gasped, “Why?”
“Satan decided that it’s best that you die.”

I didn’t feel sadness lying at her side
My sperm still swam in search of their bride
As life left her body I kissed her and whispered
“Go to your place of eternal rest.”
Her young life then quietly slipped from her chest
I said, "Thank you, sweet one. You gave me your best."

I knew enough to realize that I’d only completed part of my task. I cleaned Tiffany’s body carefully, closing her chest. Her hair was in disarray, so I brushed it, only then noticing that the color of her neatly trimmed pubic hair perfectly matched her long light ash blonde hair.

I pushed Tiffany’s legs together and kissed her cold pussy, still smelling of perfume. I wrapped her in sheets for burial. I looked at her once rosy skin now pale and thought of her smiles and peppy responses at the bar and her sweet laugh. I imagined her in heaven now and felt thankful that I had done what was required of me for her to avoid damnation. All was quiet.

When I arrived at the place that would soon be Tiffany’s tomb, I put her on the stones lining the deserted well. I placed my hands on her slim trunk and said a prayer for her soul.

Cold air rushed up from the shaft of the well and over my body, surrounding me in a dark cloud.

“Well done, my faithful servant,” came a voice within the cloud.

“I did only what you commanded,” I said, still holding Tiffany’s body steady on the stones.

“Yes you did, but there is something you must now know.”

“The attraction Tiffany felt for you was real. When I realized this, I withdrew myself and let things play out as they would. You should know that her soul was good as gold. I couldn’t touch her. At her core, she was pure kindness and would have been the love of your life had hers not been cut short.”

“You’re wrong! I was only doing as you told me to do based on the judgment you gave me.”

“You did what your mind told you to do,” said Satan. “Your deed is yours and yours alone. Tiffany was her parents' world, but now they'll only know mourning because of you. Her two future daughters will never exist because of you. The paintings she would paint, the stories she would write, and songs that she would sing, all gone!

The love you would have known for years was reduced to one night so that you could fully understand the weight of your wrong.”

“I killed her unjustly? Her soul wasn’t destined for damnation?”

“Now you see clearly your loss. Azrail is your name, and because of your judgment, you will kill again. With each death, you’ll know the same pleasure Tiffany gave in sacrificing her life. The life of your lovers will be the price of your pleasure.”

Satan continued, “You cannot resist my plans for you. You, not I, will judge harshly and trade the pain and lives of others for your lust. You, not I, are the source of unspeakable evil in pursuit of intense pleasure.”

I shook with pain at what I’d done as I rolled Tiffany’s stiffening body into the well, hearing it splash after a moment’s fall. Then, I realized that my shaft was hard. It was larger and firmer than I’d ever known, almost as if it were made new.

Finally, I dropped to the ground in a wet mist of euphoria, shaking and weak. I heard Tiffany’s voice whisper from the well, “So, this was why?”