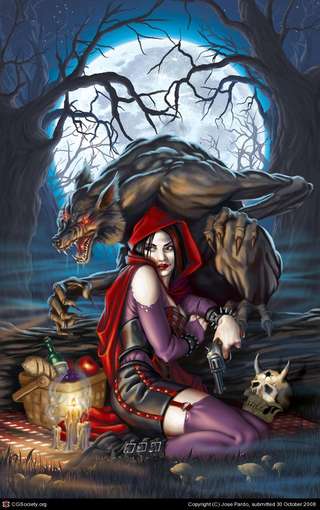 Once Upon a Nightmare!

Once upon a nightmare, in a land where dreams turn sour, something wicked this way ventured, by the stroke of midnight hour. The fairy folk we know and love, are nowhere to be found, for something has been hunting them, their blood upon the ground.

Survivors of this spate of death, decide the time hath come, to assemble all to gather arms, and hunt the hunter down. One by one the fairy tales, the names we know so well, slaughtered by an unknown hand, enchantment gone to hell.

In spite of all their valour, for the most were far too late, the fairy folk were victims, of a gruesome grizzly fate. Soon the brave survivors, made a list of all they could, yet of all the names they gathered, where on earth was Ms Red Riding Hood?

It all began on a mid summers night with a fire that burned the house of Geppetto the carpenter to the ground. His only son Pinocchio, a wooden doll he made with his own skilled hands to become the child he never had, was chopped into pieces and used to kindle the flames.

The three little piggies were roasted in their own juices, while the three blind mice were silenced once and for all with their heads placed in a wire trap.

Rapunzel didn’t answer her lovers call to let down her hair, for her scalp had been torn from her skull and her throat cut from ear to ear.

Hansel and Gretel were hanging from a tree in the middle of the woods, their bellies cut wide open and their guts spilled out beneath them.

Snow White didn’t receive the kiss from her one true love; instead the lips that touched her flesh left a hole in her throat from which her blood was heartily consumed.

The seven little dwarves were sealed into the mine as the roof was caused to collapse on top of them.

The wicked witch was found spit roasted with the big red apple stuffed into her mouth.

The beauty who tamed the beast was somehow burned at the stake, and her beastly lover she worked so hard to tame, was impaled on spear beside her.

The Gingerbread Man was crumpled into crumbs, Cinderella was kidnapped and has never been seen or heard of again, the Fairy Godmother was stabbed to death by the shards of the shattered glass slipper, Elves across the land were lined up and shot with an arrow through the heart, princesses were executed in a variety of inventively violent ways while the princes they loved were dismembered and left to bleed out.

Even the ogres met a similar fate as did the goblins, fairies and creatures of the enchanted forest.

Everywhere the magical fairy folk were systematically rendered nearly extinct by this mysterious assailant, but of them all, both good bad and even downright evil, only one remained unheard of whilst the massacre took place. “Has anyone seen Red Riding Hood?” they pondered. No one could say they had, so they went to find her Grandmother to see if she was alright. Her Grandmother’s house seemed peaceful enough until they drew a little closer. The door was ajar, the windows shattered and an eerie sense of foreboding hung heavily upon the scene. Steadily they approached; weapons at the ready and one of them bravely knocked on the front door. The only occupants of this sweet old ladies house were the swarms of flies that pestered the visitors, together with the most horrendous stench of death that emitted from every broken window. The horrors they observed inside the cottage was far beyond what they could ever dare to imagine, and still no sign of the plucky young Red Riding Hood.

Several weeks of hunting and the little lady was finally located safe and sound in the middle of the enchanted forest, but instead of cheer and celebration that she was alive and well, she was captured and arrested, and held in a maximum security facility for the criminally insane until she was due to stand trial. For never before, not even in the darkest, grimmest fairy tale, had there ever been such an accumulation of gruesome crimes committed by just one person.

Upon the day of the trial the people of the land, or rather what was left of them; was gathered to hear her excuses. For the most part she just stood there silent, peering from beneath the red hood, calm and quite oblivious to the seriousness of the accusations against her; whilst the judge read out a list of ill doings written on a piece of parchment several meters in length.  “DON’T YOU HAVE ANYTHING TO SAY!!” demanded the judge.

“No, not really,” she replied. The judge was so angry he had to take a large gulp from his hip flask whilst the gathered crowd muttered and gasped. Once he’d caught his breath from the coughing and spluttering he demanded, “THERE MUST BE SOME EXPLANATION FOR YOUR ACTIONS!!”

“Perhaps if you stop shouting and ask me nicely, then I might provide an explanation,” she said sweetly. The judge’s face turned three shades of red before he took a deep breath to retain his composure. “Well,” he said, adjusting his wig and leaning forward, “please could you kindly explain to us, why, you decided to kill all those people?”

Red Riding Hood smiled. “You see, dear old Grandmother told me all about the magic folk we live with. She even told me about the big bad wolf in the woods, you know, the one I was supposed to avoid by staying on the path.”

“Turns out he’s quite a gentleman. And in spite of his reputation he knows exactly how to treat a woman. Boy does he know how to treat a woman! (…) He was tall, dark and handsome, clever, witty and assertive, everything that I lust for in a man. He taught me things I could never have imagined, and made me an offer I couldn’t refuse.”

“But you killed your Grandmother!” called a woman from the crowd.

“What was this offer?” demanded the judge.

“You see, the big bad wolf is actually the Devil. He’s the one who gave all the magic to the people in this land, and nobody thanked him for it.”

“This is all nonsense!” came a cry from the audience.

“All he wanted,” continued Red, “was a little acknowledgement. Instead he was kicked aside and treated with the upmost contempt. He was blamed for everything that ever went wrong, and made responsible for much of the ill doing trough out this land, even though he had no involvement in the majority of it what so ever. So, he decided he wanted the magic back, but of course, nobody wanted to be without their precious magical gifts, neither did they wish to devote themselves to his praise as a suitable alternative. That’s where I came into it.”

“Basically, in return for my eternal soul, and my innocence, every fairy folk I kill, I gain their magic. When I’m the last one standing I’ll be the most powerful person in all of never land.”

“We fuck, again, only this time he makes me his bride. Then I become the all powerful queen and we rule the land of nightmares together, forever.”

“I SENTENCE YOU TO DEATH!”

Red chuckled. “Oh, I needn’t bother if I were you. He is the Devil after all and knows all your dirty little secrets.”

The judge stood from his chair and struggled with his shaking hands to place a black cap upon his head, so infuriated he nearly lost his balance. “Red Riding Hood,” he said in an ominous tone, “You are to be held in isolation under heavy guard until a suitable form of grisly execution can be decided upon to polish you off once and for all! And as for the big bad wolf, I order the formation of a militia to hunt the savage down and kill it on sight!”

Red simply laughed as the judgement was ruled. “Do you dare to mock my judgement!” bellowed the judge.

“Oh you foolish bunch of idiots,” she said, “do you really believe I did all the murdering myself?”

“I couldn’t possibly have done all that single handed.”

“But you said that-“

“I know what I said. Right now I need to complete my mission to kill the remaining fairy folk before the midsummer moon.”

“Exactly,” she beamed, “this trial was part of my plan to gather the rest of the people of never land into one place, and here you all are. Now if you’ll excuse me,” she said, removing her hood to reveal her pretty face, with bright yellow eyes and pointy teeth, “I have some slaughtering to do.”

The fairy folk were so enthralled with the court case that they didn’t notice the enormous pack of wolves creeping up around them. By the light of the full moon that very night the stream that trickled through the town was red with the blood of the remaining unfortunates.

And thus the land of fairy tales and dreams was turned into the land of nightmares and darkness. Red Riding Hood went on to become the Queen of un-enchantment, proving once and for all that not all stories end well with a happy conclusion. And why should they. Sometimes it’s good for once, when the bad guys win!

Written by Lord_Stabdagger (Lord Stabdagger)
Published 4th May 2020
Like This?
Poems by Author
Comment
#apocalypse #monsters #nightmares #werewolves
All writing remains the property of the author. Don't use it for any purpose without their permission.
likes 3   reading list entries 1
comments 2   reads 117

Commenting Preference:
The author encourages honest critique.
Re. Once Upon a Nightmare!
dizzzzzzy (Nunaya)
4th May 2020 10:35pm
That's cute