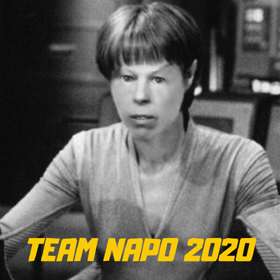 I have observed a bearded man in several areas of the ship
dressed in woodsmans clothes and writing in a notebook.
He appears to be a hologram. Some of the crew and cadets
have been studying different eras in poetry on the holodeck
for Poetry Writing Month. I suspect that this is where he
originated. I have scanned his image into the ship's encyclopedia,
and it is none other than Henry David Thoreau, the transcendentalist of the early 20th century on Earth.  Commander Deannavati confirmed that he was visited with in the holodeck at a place called Walden, a pristine wooded area with a pond where he dwelled in solitude writing about his surroundings and connection
to the natural world.

After reading up on the interesting legacy of this poet,
I have logically concluded that he is likely caught in a temporal loop,
otherwise known as 'time travel', and is actually studying us in our midst.  This was likely triggered by the holodeck visit, whereby he simply followed crew members onto the ship out of curiosity, however, I believe his lifestyle and immense wisdom gained by it may be a factor.  Because he was in such isolation in such a pristine place in life, he most likely crossed into other dimensions at some point and into other times, such as now.  It is possible that this quote, taken from his poem, 'The Moon Now Rises To Her Absolute Rule' , may have been inspired by these otherworldly experiences,

'And the life everlasting withers not'.

Also, he mentions being 'transported' in 'Tall Ambrosia',

'Who never walk but are transported rather—'

His final words to a friend asking what would come were,

'One world at a time'

Its an interesting theory, that he wrote of future technology,
new worlds and life everlasting, and curious at the same time as he
was against technology being a success of man's advancement.
He must have found today's world strange indeed. Perhaps this quote from 'I Am A  Parcel Of Vain Strivings Tied' sums it up,

'But now I see I was not plucked for naught,
And after in life's vase
Of glass set while I might survive,
But by a kind hand brought
Alive
To a strange place.'

Written by PoetsRevenge
Published 2nd May 2020
Like This?
Poems by Author
Author's Note
My entry #30 in comp Napowrimo
Entered also in the adjacent Prompt Comp as an elaboration of prompt #27, one of the adventures of the USS Stanza
Comment
#HenryDavidThoreau #NaPoWriMo2020 #science #scifi
All writing remains the property of the author. Don't use it for any purpose without their permission.
likes 7   reading list entries 3
comments 10   reads 146

Commenting Preference:
The author is looking for friendly feedback.
Re. Past And Present
Ahavati
2nd May 2020 3:57am
I was hoping you would post this one eventually! I love Thoreau; his vision resonates deeply with me ( much like Sagan and Roddenberry ).   They're all different and yet the same.

Thank you for being an integral part of Team NaPo this year; we certainly could not have done it without you!  I really enjoyed your offerings and the unique perspective that makes you you.

Re: Re. Past And Present
PoetsRevenge
2nd May 2020 4:14am
I realized after writing this that it was an irony since Thoreau hated technology, but then I thought that would just make it more humorous, and the poem about cut flowers seemed to be good final quote.  I had planned earlier in the month to write about this prompt, but I couldn't figure out who to use as a bearded man, I thought of Socrates at first, but then I came up with this at the last minute.  I also decided to write in first person in my character, I wish I had done more of them there were so many good prompts.  Anyway, I'm glad you liked this, and I'm glad I could help with the project, there was so much talent, it made it fun  :)

Read poems by PoetsRevenge
Re. Past And Present
Summerrain75
2nd May 2020 5:09am
Wow PR. This is an enjoyable read. I like how you blend Walden into this. Marvellous.

Re: Re. Past And Present
PoetsRevenge
3rd May 2020 4:57am
I'm so glad you liked this, I actually have been to Walden, there's a manmade beach on the pond, which I swam in.  The stone foundation of the cottage is still there, its the only thing still left from Thoreau.  It's really a beautiful place.  Thanks so much for the comment and RL add :)

Read poems by PoetsRevenge
Re: Re. Past And Present
Summerrain75
3rd May 2020 5:33am
Welcome PR. I read it when I was in the University in our English class. That's wonderful. 🌹🙂

Re. Past And Present
DanielChristensen (The Fire Elemental)
2nd May 2020 2:29pm
I love this, absolutely rich, organic, vibrant and sensitively aware. 🙏🏻💖

Re: Re. Past And Present
PoetsRevenge
- Edited 3rd May 2020 5:05am
3rd May 2020 5:04am
When I was writing this, I tried to get into the character of the vulcan, T'pol with her sensitivities and empathic skills, she was the chief officer of engineering from Voyager, I'm so glad that sensitivity came through, thanks for noticing that, I'm so glad you liked it, friend  :)💕

Read poems by PoetsRevenge
Re: Re. Past And Present
DanielChristensen (The Fire Elemental)
5th May 2020 6:53pm
Ah right on. I know what you mean. I am a big trekkie. I just started watching Star Trek: Picard. That is where I'm headed after DU probably. It's got a terrific plot and is just the right amount of sentimental.

Re. Past And Present
RPM1on1
9th Jul 2020 1:37am
Really fun read.  You should send Reg Barclay to do a level three diagnostic on the holodeck...and Perhaps introduce Thoreau to Professor Moriarty.

Re: Re. Past And Present
PoetsRevenge
9th Jul 2020 5:33am
I love it, awesome idea, I'll consider that, thanks for the suggestion, I'm glad you liked it :)