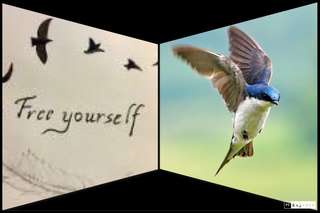 Somewhere in the chaos that I was raised in,
I managed to get it into my young, innocent, and naive mind,
that I didn’t have to be defined by the dysfunction.

Sometimes I think it’s sheer luck, other days,
I cling to the comfort that it’s divine intervention.
A part of a larger plan, I am not meant to understand.

It’s a perplexing place to be,
when you decide you no longer want to be held shackled to the life that was presented to you,
the one you had no other choice than to believe was destined for you.
To no longer wish to be held back by the demons of someone else’s past

Although their burden was never mine,
the weight of their world laid heavy on my shoulders.
And living in their world, according to their rules, left me tarnished and full of scars.

In order to break free,
I had to let go of the security and familiarity
that came with following the devil I knew.

It’s lonely,
it’s terrifying,
and it’s incredibly vulnerable
to forge a path entirely of your own making.
For life wasn’t designed to be that way.

How do you trust the outside world to be any safer
than the place you were supposed to call “home”?
And how can you know where to go,
without someone there to show you the way?

But looking back on it now, I can see...
I was surrounded by birds who had allowed life to clip their wings.
And If I had believed the lies they told me,
or bought into the false ideals they tried to sell me,
Well...
…then, I never would have learned to fly...
...and what a magical world I would have missed out on.