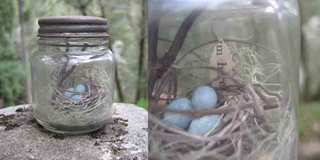 For Every Bird, A Nest

At the point where harbour wall curved onto sand, we found seagull chicks. Dead. Alison wanted to preserve them. She had seen a BBC documentary. Rows of dead things in jars.

“God is dead,” she said, repeating a slice of the narrative. “Myself is mutilation and separation.”

Under a furnace God-less blue sky, we placed the cadavers into a Woolworths’ plastic bag and carried them home. They were cramped into an old jar, which Alison filled with methylated spirits. The chemicals gnawed at their raw skin and released a flotilla of pinkish shavings. These fizzed to the surface, like drunken divers sprung from the seabed.

Alison shook the jar and pressed her giant’s face against the glass. Birds swayed violently, on verge of flight or opening minute beaks. Whirlpool soon faded.

Shortly, Alison placed the birds on a baking tray, as she had seen her Mother prepare Sunday roast. “Robbie Bach,” she addressed me coldly. “When they cook, you must eat them.”

As a metronome pulsing out of control,
My heart beat in tune with gradients of fear.

Never ate the avian appetiser, instead
Buried in the baked clay.
The world became thinner
In space between skin and bone;
Small heart rattled in rib cage
All surface, no feeling
Of raked breaths in cored depths.

In the minutiae of everything unravelling
I built nests from pub sawdust
Defrocked feathers
Twigs so tiny they couldn’t hold a blaze.
Bundles of letters, summer sundries
Pavement rain cracking my skull.

A curate’s egg could never fulfil me
Or make me worship or whole?
In a hollowed tree, in glade greened,
A pair of brown eyes
Has always waited for me.

What of Alison? Well, she found home in various youth detention centres and finally Reading Jail. She was to die of a heroin overdose in a vomit soaked bedsit over a Soho sex shop. Her body was flanked by reams of written verse. Well, not quite. That may have embellished ordinary lives with a romanticised stupid notion of poetry and squalor, but in reality, she became an accountant. Settling for suburban family duties. It open to conjecture whether she ever visited Soho or fed her kids baby bird pie? I envy her two fold security.

The intended pic was not really appropriate. So settled for pic on pininterest.

Written by Strangeways_Rob
Published 20th Apr 2020
Like This?
Poems by Author
Author's Note
# UMANOID. Returning to my prose roots. Lol. Home has always been a question mark? "There's always someone singing a song about us on the radio." Billy Bragg ;) ALL STAY SAFE
Comment
#God #identity #love #nature #universe
All writing remains the property of the author. Don't use it for any purpose without their permission.
likes 7   reading list entries 5
comments 5   reads 193

Commenting Preference:
The author encourages honest critique.
Re. For Every Bird, A Nest
DanielChristensen (The Fire Elemental)
20th Apr 2020 1:06am
Your voice is alive with feeling and meaning. Metaphors in particular are of terrific impact. It's always an experience. 💖🙏🏻

Re. For Every Bird, A Nest
Anonymous
20th Apr 2020 1:49pm
I like how this poem ranges from a meditative observational style ... to surreal ... and abstract, and even a bit of humor. There's a lot here for the mind to grab onto. I think I love your descriptions of the birds in the jar most of all.

Re. For Every Bird, A Nest
souladareatease
20th Apr 2020 9:54pm
Top-Shelf Rob!!!
Smooth read that winds up fast with its energy.
Interesting break-away that fits nicely tucked in there!!!
Pen On Good Man!!!