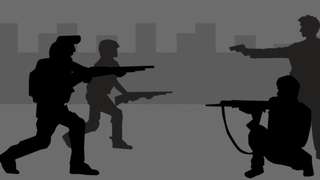 Turf Wars  (It's All About The Dope And The Money)

Come on sexy cheer up, I could had told you love ain’t shit
You may be right, I suppose you would say it was just an opportunity to get me some available dick
I see you caught my drift
No, not that handsome gift, and our midnight slip and dips
Say, you should still be happy with that last hit

It would had given me so much pleasure
If that fuck only gave up the whereabouts of his treasure
He would had if you didn't shoot him dead
It was either him or me feeling lead
I just got wind, we’re needed in the ATL, what the hell!
Nope, it’s not going to happen the last hit was a fuck-up
Say what, we got the pounds, and the money, and we even called in the Po-po on the bust

Yes, and that's only because we didn’t have time to bail
Well the next time we will be quicker so we won't fail
And I’m wanted dirty in the South, and I look too sexy to live in a cell or the attire they wear in jail
Are you getting soft on me
You could say that, let it be known this life I had the chance to gladly flee

Then why the fuck didn’t you
The freedom to move, the money, the ghost identity, and my grann may be wise, but I’m no fool
What happen to the dick who turned you to miss goody two shoes?
Time was not on our side, too many past dues
Come on, it’s time we catch this early flight
We have to move the product, while creeping at night

Where’s the jet
In good hands, I suspect
Your crew said something about cornering the nest
Nest... nest… oh fuck... I told them to leave that turf war at rest
I hope you are strapped for a blood bath and for this retaliation, we may need to wear two Kevlar vests
Your boys wanted blood when they spotted someone on our tuff from the Russian Drug Cartel
Yeah... those are some ruthless suit and ties, who would fuck you up, on heads or tails

We’re out, the ATL can wait...Miami it is…damn! Those stupid ass dicks, shit!
Yeah sexy, but they always got your back and keep you safe from any unsuspecting hits
Call in our runners, we are going to need them, and let the shit fall where it may
On their heads, on their tuff at least I pray

Written by SweetKittyCat5
Published 14th Apr 2020
Like This?
Poems by Author
Author's Note
Who fills this shit in!..and fuck you if you say me!

The Nun Runner
Comment
#drugs #war
All writing remains the property of the author. Don't use it for any purpose without their permission.
likes 1   reading list entries 0
comments 4   reads 122
Commenting Preference:
The author is looking for friendly feedback.
Re. Turf Wars  (It's All About The Dope And The Money)
Phantom2426 (Francisco J Vera)
15th Apr 2020 3:47am
Sex, drugs, and rock n roll.  Hot damn poem.  After the drug war, hot sex needs to follow,  Lol.  Keep on writing.

Re: Re. Turf Wars  (It's All About The Dope And The Money)
SweetKittyCat5
15th Apr 2020 4:01am
Ahh.. listen to you, and thank you sincerely for reading my gritty musing. I feel honored because I was asked recently to make this into a penned series and thank you so much for taking the time to read and then comment my poet. It's late, therefore, enjoy your evening as well

Read poems by SweetKittyCat5
Re. Turf Wars  (It's All About The Dope And The Money)
nutbuster (D C)
15th Apr 2020 2:28pm
sounds like some places i have lived in the past East LA was the wroest

Re: Re. Turf Wars  (It's All About The Dope And The Money)
SweetKittyCat5
16th Apr 2020 8:37pm
Remind to strap up if I am ever cruising through.. thanks for giving me a shot out