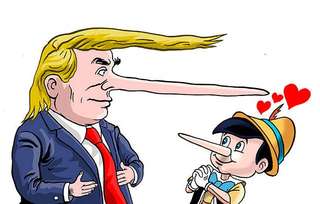 I can't wrap my mind around why
why defend a terrible person
one that represents everything disgusting
hate is a strong word
but I hate everyone who supports this man
it's not even about opinion
it's about right and wrong
and if you support him
you're fucking wrong!
so sick is the twisted
and so twisted are the sick
tell me when God will come
I want to record his reactions
when he sees you elected a Cheeto
hold him up as Jesus
fuck you for shutting your eyelids
this is not a plea, nor a silver lining
if you support this monster
I'm no friend of yours

hysteria over lies
hope will always die
when we refuse to see truth
kids separated from families
locked up in cages
coming up with every reason
to help you sleep at night
tell those reasons to your fucking self
I heard it all before
it's just another fuck you to the world
so you look away without a question why
it's because you're wrong
and deep down you know it
years ago you accepted being a dog
beaten till you followed in line
saying "well he said that, but he did this"
like that makes up for treason

no one's above the law
unless you're a dictator like Trump
go on Twitter like a teenage girl
crying to the world
saying you are the victim
not that I blame you
I just can't believe there are fools who buy it
how can they let this country become so vulnerable?
if Trump wanted to eradicate the Mexicans
there is no one who would stop him
fucking cowards
all of you!
these are fucking human lives!
but keep eating his shit
doesn't taste that bad when it's coming from his ass
now let's all salute cadet bone spurs!

"He’s a war hero because he was captured. I like people that weren’t captured, OK?” - Trump

Written by DevilsChild
Published 20th Mar 2020
Like This?
Poems by Author
Author's Note
https://theintercept.com/2019/12/19/a-z-trump-impeachment/
Comment
#anger #hate #politics
All writing remains the property of the author. Don't use it for any purpose without their permission.
likes 5   reading list entries 2
comments 0   reads 95