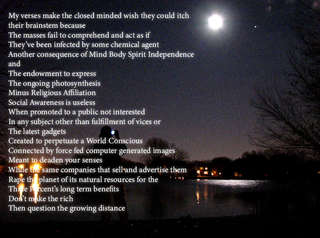 Re. Harsh Critique
Shakespearan-Sweet
25th Apr 2020 00:48am
Poets are deeply intuitive people some of us are able to tap in to a higher conscious,Gamma We are the producer, director, and actor . I only have  been writing for two years and amazed what comes out.  Keep on writing prophetically.