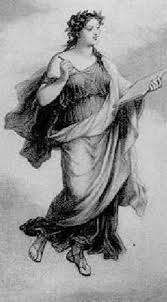 God is dead (Apologetics over poetry, poets and commenting)

As the Muse stands astoned,
pearly tears in her eyes,
the words seep through
as the pen caresses the paper.
Poíi̱si̱, the love child of the Gods
granted with love to Man, is laid upon
the heart, mind and soul of the bard,
humble servant and receptor
of the Holy Shadows of the pantheon,
mercy for all who attend devout.
Prodigy given by the Goddess to soothe
our restlessness , it is bestowed
on few chosen initiates
who are enslaved to her trust;
too many, in vane, believe
to have possession of Her graces.
Oh useless mortals, frauds,
whom believe to have become
demigods for having read
and had one glimpse of eternity,
how dare you claim
to own the seed of Apollo,
inbeded in the womb of Kalliope,
on the evergreen slopes of Olympus?
You have turned pain into mockery,
Love into a farce, Lust into vulgarity,
Anger into dust.
Behold the cries of outrage
rising from the the graves of those
who have served the nume passionately, exudating emotions, grace and order
as the Word blessed their pens,
knocking on their hearts,
deeply kissing their foreheads evermore.
Stop! Bow your heads in silent devotion;
they still live even if they seem dead.
They have sacrificed their lives to One faith; tender to the touch, the gods
have possessed them.
So stop your arrogance in worthless scribble; you will be rewarded, for the gods are good.
Do not use the word for harassment.
You will fall on your own sword;
pungent words of vulgarity die,
like burning sawdust, instead of wood.
Read, think, listen.
Only write what is deemed by the Muse blessed.
Posterity will judge us all;
let it be a remembrance of servants,
not shamed or misunderstood.

Poetry is a divinity by its own right : to be served, to be loved, to be cherished. Anything else is idolatry.
Juvenalis
Show Less
Comment
#learning #philosophical #sacrifice #spiritual #WritingPoetry
All writing remains the property of the author. Don't use it for any purpose without their permission.
likes 4   reading list entries 3
comments 6   reads 62

Commenting Preference:
The author is looking for friendly feedback.
Re. God is dead
SweetKittyCat5
13th Feb 2020 9:03pm
Your beautiful musing was food for thought and such tender awareness to the heart bestow,

Prodigy given by the Goddess to soothe
our restlessness , it is bestowed
on few chosen initiates
who are enslaved to her trust;
too many, in vane, believe
to have possession of Her graces.

My love, these stanzas are astounding to any gifted poetess in reverence to the vow of bestowing the written word and not to fear of its provoking responses in return, however, through the word carries the weight of the heart, penned from the cortex of the mind, and for each poetess, to have such gifted qualities to bestow to any reader in all is existing and splendid glory, is touching in its own right. What a mental, yet arresting serenade, I am blessed to love the man and appreciate the poet within

Re: Re. God is dead
Juvenalis66 (Juvenalis)
13th Feb 2020 10:59pm
"My love, these stanzas are astounding to any gifted poetess in reverence to the vow of bestowing the written word and not to fear of its provoking responses in return, however, through the word carries the weight of the heart, penned from the cortex of the mind"
Thank you my sweet love for your heartfelt response and, if every poet/poetess should not of it's provoking response, it is good form of every writer and every commentator, to use the respect given to the word, through grammar, humility, and form or style. That is the duty of the writer my love and you know that because you do that automatically in your poems and writings, but not every one is a poet or a writer just because he/she wakes up and decides to put in writing things or emotions without respecting or researching the tools. If everyone just wrote according to his own rules, it would be useless to write at all because it would become a Babel. And I will not here talk about the grace of writing with style and "buongusto" as the Italians would say. Now in regards to commenting. We know that everyone has the right to an opinion, but if we are commenting in a way such that human beings are left to spit blasphemy and extreme forms of language that may be in tone with some poetic material, but not a compatable format respectful of the writer or the other readers. It is safe to say that we can say whatever is allowed by the theme of the poem, but we all must use the responsible respect due to the sacred temple of poetry. You honour me my true love, with the blessings of your precious heart, which loves that all people be respected and I am one lucky man to have had the gift of loving you as a woman, as my love and as a great and complete artist. Thank you for your lovely and generous comment, filled with insight and compassionate love towards myself and all those present. I will always love you. ♥️

Re: Re. God is dead
Juvenalis66 (Juvenalis)
13th Feb 2020 11:08pm
Thank you for your kindness and support in this matter that is dear to every poet that can be defined as such. What you affirm is true. There is no respect towards the dignity of poetry, nor that of the poet. But not in regards to the themes, as they are and who wants to write them, has the right to. But they must be seen for what they are. Not for what they are not. And commentators and critics need to be professional and respectful. We can accept compliments and light remarks, but here some go really deep with vulgarity in responding to the poem and the poet/poetess. I think that should not be a way to communicate certain things. It becomes deeply disrespectful and useless to the reason that we are here for. So yes, it has been said and it will be said until something is done about it. Certain apples fall on their own. Thanks again and enjoy your evening and weekend

Read poems by Juvenalis66
Re. God is dead
crowfly
16th Feb 2020 7:01pm
"Poetry is divinity by its own right."  So true!  No other art form approaches the divine with pure eloquence.  I find that here.

Re: Re. God is dead
Juvenalis66 (Juvenalis)
16th Feb 2020 8:57pm
Thanks Thomas. Too often we forget that we are servants and not gods. We can only thank for the gift we have received freely. Thank you for reading and commenting and for your reading list add. I apologise for not having been on your page lately. But I will as soon as possible because I know you are greatly loved by the Muse. Have a great week.