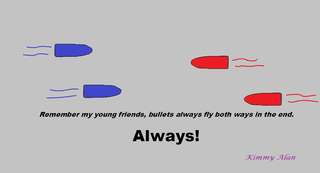 So, he began searching his storage closet
While sorting through his old belongings
Images of those dead children he taught
Murdered in his school’s mass shooting
Flashed vividly in obsessional imagery

The present his father gave him on his 12th birthday
A .22 squirrel rifle given as rural rite of passage
Like David with his sling, he was a crack shot
The last time he used it was to kill a coyote
That was raiding his family farm’s livestock
After the predator had killed a lamb
He shot the brush-wolf right behind the ear
At over a 100 yards while it was running

Removing the vintage weapon of from its shammy sleeve
Holding it in his hand he said,
“Hello my trusty old friend
You and I are back together once again
We’re going to a Second Amendment rally
To show them how it’s done”

Together they walked out the door

Remember my young friends, bullets always fly both ways in the end;
Always!

Written by snugglebuck
Published 12th Feb 2020
Like This?
Poems by Author
Author's Note
Inspired by Billy Collins poem 'Flame.'
Comment
#anger #CallToAction #politics #revenge #violence
All writing remains the property of the author. Don't use it for any purpose without their permission.
likes 9   reading list entries 5
comments 8   reads 448

Commenting Preference:
The author is looking for friendly feedback.
Re. My Second Amendment Friend
NewBeginnings
12th Feb 2020 1:44am
Wow! Powerful piece, snugglebuck! Excellent story and message in this one!

Re. My Second Amendment Friend
Ahavati
12th Feb 2020 1:49am
OMGOSH! NAILED IT! TOTALLY NAILED IT, snuggle!

Now THAT'S how you do the essence originally! Bravo!

Re. My Second Amendment Friend
Billy_Snagg (Snaggy)
- Edited 12th Feb 2020 4:30am
12th Feb 2020 4:29am
Yeah, and it's funny (ironic) how you never see black people carrying their guns to these amendment rallies. That can't be right in the name of equality.

Re. My Second Amendment Friend
JohnnyBlaze
12th Feb 2020 12:28pm
Irony and poetry go hand in hand like siblings skipping through a park.

Here, you have both for maximum effect, SnuggleB.

This surely is a contender; but I will wish you good luck in the comp just the same.

Re. My Second Amendment Friend
Ely (E.A.Rothwell)
13th Feb 2020 2:07am
Awesome write about the right and the
rite of passage...good showing old buddy...hugs... Ely

Re. My Second Amendment Friend
wallyroo92
14th Feb 2020 6:10pm
Damn, that was pretty amazing. I'm getting to these comps later this weekend but I loved the narrative and how much it applies to what's happening.
Thank you for sharing Snugglebuck.

I've been away from DUP but I am so glad to see your writing is still on fire.  Strong insightful work, my friend, and so very relevant. Keep fighting the good fight !