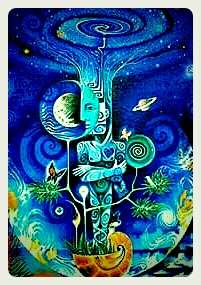 In a terrible time of famine, war, pest and inquisition,
a master Wicca giving homeless boys a apprentice permission.
They had to maintain a household in an isolated place,
working very hard to earn some recognition to face.
Collecting woods, herbs and edibles to survive
building a garden, harvesting some fields to strive.
When the moon was new the master summonsed the boys,
teaching them the art of magic, using dark power like toys.
The very same power was keeping those young men imprisoned,
some tried to run away, but got lost and ended up same place wrested.
He turned them into ravens, spying on innocent prey,
and gave them that illusion of freedom that they can fly.
The deeds of darkness had its toll and innocent hearts rebel,
they could not take the viciousness by mental means able.
The Wicca promised them the virtue of ultimate power,
focusing only onto the abuse by tragic endower.
The ravens tried to work together against the masters will,
but could not fit his evil visions to conquer the needed bill.
In disguise of 7 Ravens they had to visited villages,
creating distractions for the dark master to take advantages.
One Raven got injured during some chaotic rage,
a maiden of gentle touch, nursed the captured creature in a cage.
Not knowing that a boy is in this disguise of a bird,
and the young man was in awe of all he heard.
She was talking about a charming prince she dreamed to meet,
giving her the stillness for the loving longing as a deed.
The raven recovered and the boy’s heart was enchanted,
flying back to the brothers and the master will granted.
He told his fellows about the beauty he is feeling,
and knew it is the way to conquer all fears and controlled stealing.
They decided to fly to those villages to find some maidens of charm,
exchanging bodies to create loving features with no harm.
Soon they hearts where all full of joy and virtues abilities,
much against the masters witching capabilities.
His own manipulation fell against him by circumstance,
leaving nothing left to do, giving those young men the advance.
They swore an ode, never to use the art of dark power,
living a life with the meaning of celebrated love in any hour.
Still hearing from time to time the voice of a Crow,
sounding like the croaking noise of…. nevermore, nevermore

Written by fearlessstars (Robert Rittel)
Published 9th Jan 2020
Like This?
Poems by Author
Comment
#birds #fairies
All writing remains the property of the author. Don't use it for any purpose without their permission.
likes 0   reading list entries 0
comments 0   reads 93
Commenting Preference:
The author encourages honest critique.