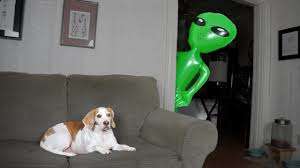 Humans Ha!
á á They figure they're so smart
á á Thinking with thier genitals instead of thier brains then blaming thier hearts
á á How do they stay on the same planet, but act worlds apart?
á á Out of this world, asking for forgiveness, wishing upon a star
á á I've seen it time after time again. These humanoids all live on earth, treating one another so alien
á á Observing them bicker among themselves about world peace, long enough to deceive, just to devour each-other like beasts
á á What makes mankind any better than the trees, or more superior then those they share thier planet with, which walk on all fours?
á á Oh?! Is it because they have "so-called" divine spiritual and intellectual development with capability's of planning then going to war?
á á There's no denying these are the most vicious creatures roaming this universe, for sure
á á Does any of this sound homo sapien?
á á No
á á So, me being the U.F.O.
á á I'm here to put you critters under control
á á You can call it an invasion, we call it the next step
á á Get ready, get set
á á The Humane Society for Humans is now open!
á á It's ok you filthy animals
á á You will all make great pets!
á á á á

Written by StruggleFreePotery (StruggleFreePoetry)
Published 24th Nov 2019
Like This?
Poems by Author
Author's Note
Please comment
Comment
#nature #universe
All writing remains the property of the author. Don't use it for any purpose without their permission.
likes 0   reading list entries 0
comments 0   reads 232
Commenting Preference:
The author encourages honest critique.