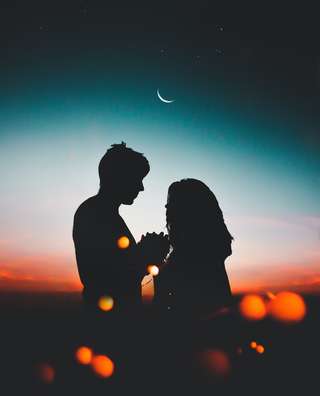 Her lips moved as his body consumed her.
Breath like a drum,
hands like a snake.
Exploring parts unknown to her own self.
The waterfall that flowed beneath her,
like the fountain of youth
he so desperately craved.
The arch of her back,
like a bridge in which he climbed.
With the look of starvation in his eyes,
he feasted as if he'd never eat again.
Not only did her legs shake,
like the earth after a war.
But her whole body trembled
as each echo sprung from her mouth,
opening her doors just a little more.
She wanted the feeling that came with each movement.
The way their mountains responded.
The shy spot between her legs
grew warm and wild as he danced inside her.
It was only when she forgot her own name,
she realized how hungry she'd been too.

Written by Wallflower24 (Jordan)
Published 15th Nov 2019
Like This?
Poems by Author
Author's Note
There are different forms of love, this one just happens to be physical.
Comment
#FirstLove
All writing remains the property of the author. Don't use it for any purpose without their permission.
likes 10   reading list entries 4
comments 5   reads 523

The waterfall that flowed beneath her,
like the fountain of youth
he so desperately craved.

The shy spot between her legs
grew warm and wild as he danced inside her.

A poem gushing with desire, it might be considered. A beautiful hymn to first physical love. I more than Like it.

Re. The First
PandoraUnleashed
16th Nov 2019 9:22am
Great write & usage of metaphors/allegories! Welcome to the Deep too...🌺...Pandy

Re. The First
MusikSchrage
17th Nov 2019 5:43am
Wonderfully passionate with so much latent desire and words left unspoken. A beautifully written poem. Thank You

Re. The First
Rachel_Lauren
18th Nov 2019 8:44am
So incredibly impressed by this. Sensual, sexy, beautiful.