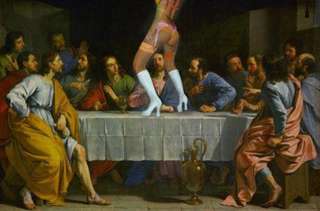 “It’s a thought that has crossed many people’s mind
Unthinkable, because he’s sin free and divine,
“But I’m here to give you my thought on something
What if Jesus was straight fucking?

“To keep the masses occupied, changing water to wine
He would be somewhere getting on his bump and grind,
“Creating a magical barrier of silence so she wouldn’t make a sound
Then a short prayer over the pussy, before he start to pound,

“Thou without sin cast the first stone
Shit he will be thinking while chased from another woman’s home,
“The Lord saying ‘Thou didn’t send thee to Earth for thy shit’
All over thy land he’s slangeth unholy dick’.

“Privately raising fine bitches from the dead
And for resurrection payment it was pussy, head and a warm bed,
“Not only for him, but his whole crew
Twelve mutherfuckin deep they gang-banged pussy until they were through,

“Any pussy fucked-out and smelled like fish
With a head nod it tightened right up and the stank he would easily dismiss,
“Because he would ride ass like he rode a donkey
Without grace or mercy until it was creampied and funky,

“And don’t let me get started about the last supper
It would be a straight pussy party up in the motherfucker,
“Spilling out into the streets causing a city wide riot
Arrested and butt-naked waiting for judgment by Pontius Pilate,

“Even dying would not stop his pussy play
Because he would be back on it on the third day,
“Getting it in and Armageddon fucking to the end
Until, into heaven it was his time to ascend”.

Re: Re. Jesus F*ckin’ Christ
CasketSharpe
11th Sep 2019 10:24pm
Touching those subjects many think about, but afraid to write about.

Read poems by CasketSharpe
Re. Jesus F*ckin’ Christ
Beholder
11th Sep 2019 8:31pm
Nobody else gonna say it. You going to hell. Lol. This is some crazy ass shit.

Read poems by CasketSharpe
Re. Jesus Putting It Down
RexDurkin
12th Sep 2019 6:00am
BLASPHEMY!!!
If this were the middle ages you'd be burnt at the stake.

Re: Re. Jesus Putting It Down
CasketSharpe
13th Sep 2019 00:16am
Not only will I burn motherfuckas would add, vegetables and seasoning to my ass. Lol.

Re: Re. Jesus Putting It Down
CasketSharpe
13th Sep 2019 00:18am
Just taking it there. A thought  of what he would do using his powers for a sexual nature. Overall, thanks for reading and commenting.

Read poems by CasketSharpe
Re. Jesus Putting It Down
Cocoa
13th Sep 2019 1:52am
My handsome poet, this is one for the books...you are the only true poet on DUP who can write about any subject, any matter, and it makes perfect sense, its informative, creative, or its just in your face, must poets cannot do that, or they are too limited mentally to think outside the box; you should be so proud of yourself, truly

Re: Re. Jesus Putting It Down
CasketSharpe
13th Sep 2019 1:59am
I truly appreciate the comment.

Read poems by CasketSharpe
Re: Re. Jesus Putting It Down
Cocoa
13th Sep 2019 7:44pm
Its well deserving