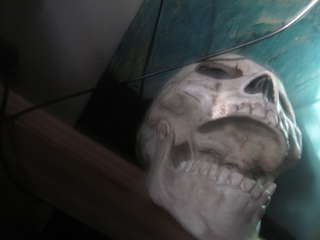 Pastrami, If Not Salami....A Guide To Failed Heart Fatigue In Human Look-Alikes

A regular day in someone else's pairAdice (snake eyes!),
that wouldn't've been given that "second thought"
a few little years ago. (Or, maybe not even a first
thought if it occurred before your Leah died).
Seems every fucking slightest move....

Them soul cooties is all outta whack, providing a most discomfiting,
enduring, unflagging weariness, unimaginable in it's scope
and context, to the average liver of human life, (except
perhaps by paralytics of some ilk or an'other).

No pride (for sure) in being a "survivor" of twenty years of
cardiac battle, combat, (or any other lame metaphor that
suits your craving some validation on this puny human scale).

EXhausting!    It's sitting right here, right in front of me, awaiting judgement
of the regular guy, common man/woman, who's job it is
to decode for encrypted evidence of fraud, foul play, or
even parent'icide in any world not so different from
one's overblown fantasies.
!exhausting!

(Ah, but, of course, there'in lies The Awareness yet to be cultivated!)

Written by dkzksaxxas_DanielX (DadaDoggyDannyKozakSaxfn)
Published 11th Sep 2019
Like This?
Poems by Author
Author's Note
Poetry is not "serious business". There is no "serious business" in huamanland.
X'press Yo'Self !!
Comment
#despair #happiness #hope #rejection #sadness
All writing remains the property of the author. Don't use it for any purpose without their permission.
likes 3   reading list entries 0
comments 6   reads 116
Commenting Preference:
The author encourages honest critique.
Re. Pastrami, If Not Salami....A Guide To Failed Heart Fatigue In Huma
Ahavati
11th Sep 2019 9:13pm
Brilliant last line which highlights the insight of the whole piece. I really enjoyed the form on this; the repetition added a lyrical quality to it.

Re: Re. Pastrami, If Not Salami....A Guide To Failed Heart Fatigue In
dkzksaxxas_DanielX (DadaDoggyDannyKozakSaxfn)
12th Sep 2019 7:50am
fhank you and bless you (even if y'didn't sneeze)

Re: Re. Pastrami, If Not Salami....A Guide To Failed Heart Fatigue In
dkzksaxxas_DanielX (DadaDoggyDannyKozakSaxfn)
12th Sep 2019 7:52am
well, it's all not heart-Kosher......i must refrain. Thnx.

Re: Re. Pastrami, If Not Salami....A Guide To Failed Heart Fatigue In
dkzksaxxas_DanielX (DadaDoggyDannyKozakSaxfn)
14th Sep 2019 7:38pm
Bar-Kays !   That's the ticket!