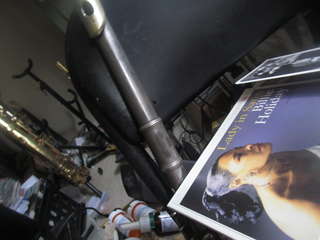 I'm dealing with a personal tragedy that i'm sure is gonna hang with me for the rest of my broke-down life. The death of my dear daughter Leah on July 4th, 2018.
Death of a child, regardless of age, is a whole different grief from that which other deaths cause.
Make long-story short, I have lost 99% of my 'respect' for human life via the way we treat each other collectively.
We will not be "judged" by our self-important "individuality", but will be judged (metaphorically at least), by our behavior as a collective organism.  In that respect, we fail miserably.
Since Leah's death, i have become so disinterested in my "arts"....most prominently, my music. After 47 years of playing every day, i haven't picked up one of my saxes in over a year. I've become a shut-in. People's normalcy and lack of creativity saddens me beyond expression. I've never been a Sally Sunshine, but THIS is a depression that was hitherto incomprehensible for 67 yrs on earth. Luckily, i was able to force myself back into poetry. I realize that most of it is "good", but it all FEELS like utter shit, and "why bother?" I spent 25yrs working for a most prestigious psychiatric hospital, the last 10 yrs of which was specifically in alcohol & drug recovery. I became sober the year Leah was born ('87) & had 3 decades sobriety when, last year, she, very quietly drank herself into an incurable liver failure. We didn't realize how bad off she was until it was to late to get  transplant red-tape in gear.     How's all that for tragic irony? Well, I've already blabbed too much about this shit. All human life is based on suffering, & ends in abject sorrow.....so we kill ourselves to be HAPPY at whatever cost. Enough. Nice to've "met you". Am always ready to "entertain" wit these tales of woe. Ha !

Written by dkzksaxxas_DanielX (DadaDoggyDannyKozakSaxfn)
Published 6th Sep 2019
Like This?
Poems by Author
Author's Note
......... and then, you die.
Leah Marie Kozak - April 30, 1987- July 4, 2018
Comment
#death #depression #grief #heartbroken #LifeStruggles
All writing remains the property of the author. Don't use it for any purpose without their permission.
likes 5   reading list entries 2
comments 8   reads 187

Commenting Preference:
The author encourages honest critique.
Re. "....and then, you die" Letter from "dkzk's Great C
Ahavati
6th Sep 2019 3:06pm
Thank you for sharing, Danny.
Much Love <3

Read poems by dkzksaxxas_DanielX
Re. "....and then, you die" Letter from "dkzk's Great C
cold_fusion
6th Sep 2019 3:08pm
Peace to You big man!.. thank you for sharing such personal loss with us Dadda... something as father i cannot fathom... respects..deep wishes of peace to you!

Re. "....and then, you die" Letter from "dkzk's Great C
dkzksaxxas_DanielX (DadaDoggyDannyKozakSaxfn)
6th Sep 2019 7:15pm
Peace to all us Pieces left behind.

Re. "....and then, you die" Letter from "dkzk's Great C
MadameLavender
6th Sep 2019 11:27pm
Hang in there Danny—it ain’t easy being a parent at times . I can’t even imagine your loss, but I get it—we die a little death ourselves , each time something bad happens to our kids.

Spending the day babysitting my 24 year old daughter who lives 2 hours away from me —she had a grand mal seizure last night out of the blue, & landed in the ER, after 9 years of having the epilepsy under control .  Resetting the clock & down the unknown roads once more...

your poetry has always stood out for the right reasons. much respect, Danny Bhoy