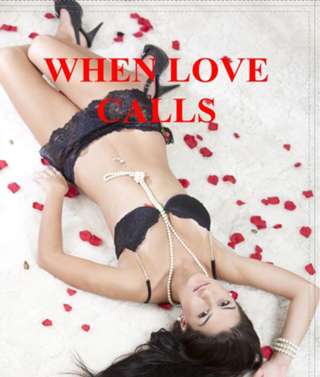 Marcus looked down at the chessboard. He looked up at Zaniyah.

“I would really think about that next move handsome.”

Marcus glanced down at Zaniyah’s breasts.

“I am definitely thinking about this next move. Checkmate.”
“Really.”
“Take a look beautiful woman.”

Marcus turned the chessboard around to allow Zaniyah to see she had no other option, but to surrender her king.

“I guess I have to pay the pauper.”
“That you would.” Marcus lifted the bottle of wine from out the icy depth of the ice-bucket. “Would you like another glass of wine?”
“Yes.”

Marcus refilled Zaniyah’s wine glass. He lifted his wine glass and toppled it. He replaced the bottle of wine back inside the ice-bucket; he moved the chessboard aside.

“If a beautiful woman is going to share my bed, at least I would like to know more about her.”

Zaniyah placed her wine glass down on the carpet.

“There isn’t much to tell. I am the only sibling of...” Zaniyah’s voice dropped to a whisper. “Of…my father is a very important man.”
“He must be for you to forget his name.”

Marcus placed his wine glass near hers; he gently clasped Zaniyah’s chin and turned her face around.

“No one here is judging you.” He rubbed his finger over her top lip.
“For a woman who could have gotten me fired, which I could look past. You are a very attractive woman.”
“I’m sorry about that.”

Marcus scooted closer. He lifted Zaniyah’s face, and leaned forward. He brushed his lips against hers.

Common sense advised Zaniyah to inch her presence back, smack his face.

Zaniyah palmed Marcus’ face; allowing her lips to be consumed by the overpowering of his.

The plush carpet cushioned the embrace of her back.

Marcus kissed the side of Zaniyah’s neck. He slowly rubbed his palm up one of her legs. He kissed her passionately without relent. Once he realized she did not have any underwear on, he roamed his palm over her flat abdomen.

Zaniyah linked her arms around Marcus’ neck. She pulled his upper body downward.

Marcus unbuttoned the first button of the shirt Zaniyah had on, the second, the third button, and then the last two remaining buttons. Marcus divided the shirt and kissed over the rosy-colored nipple. He suckled it into attention.

Marcus stroked Zaniyah’s clitoris. He removed his finger, inched back, and then wetted it. He rubbed it through her fine downy hairs before snaking it inside her pussy.

Zaniyah arched her back at the gentle infiltration.

Marcus’ tongue skirted to the other breast nipple. His finger ventured farther inside.

Zaniyah moved her pelvis and then gyrated her vaginal walls against the smooth back and foward insertion of Marcus’ finger.

Marcus withdrew his finger. He outlined Zaniyah’s lips with it. He leaned down and tenderly captured her lips.

Zaniyah opened her legs wider. She reached down and palmed Marcus’ erection; she stroked the length, sqeezing the width.

Zaniyah leaned her body upward and kissed the side of Marcus’ neck. Her thumbs dipped behind the waistband of his sweatpants.

Marcus clumsily assisted Zaniyah’s effort. His sweatpants rested on his upper thighs. He inched back and rolled onto his back. He pulled his sweatpants down his legs and then took them off.

Zaniyah reached over and palmed Marcus’ dick. His pre-cum greeted her palm. She pivoted her head and looked up into his eyes.

“It appears someone is very eager to please.”

Marcus looked down at his manhood.

Marcus palmed the side of Zaniyah’s face and kissed her. He tugged her upper body on top of his.

Zaniyah’s body naturally followed the lead. She wondered how a simple wager of chess landed her on top of a handsome man’s groin. Zaniyah moved her mane aside, leaned her face downward, and kissed the dagger tattoo on Marcus’ upper chest wall.

Marcus was pissed he did have condom at his disposal. His manhood was throbbing to the point of near exploding.

Marcus rested the back of his head on the carpet.

“Well, after this night. I think you will be begging to be in my bed.”
Zaniyah palmed Marcus’ manhood and opened her mouth; she eased her lips down the solid taut skin.

Marcus palmed Zaniyah’s head, encouraging the foreplay of her pleasing him.

Zaniyah removed her mouth. She held Marcus’ dick upright and planted tiny kisses up and down, and then over the fatten helmet.

“Oh fuck, your mouth feels good on that dick beautiful.”

Someone pounded on the door.

Marcus and Zaniyah’s eyes zoomed to the door.

“Shit!”
“Don’t worry handsome; remember I have a date in that king size bed up there.”

Zaniyah winked at Marcus. She scooted back and sat on the carpet.

Marcus sat up and then stood.

Zaniyah fingered herself, and then licked her finger.

“I do not plan too handsome.”
“You are playing with a hungry tiger woman.”
“Roar tiger once you are deep inside of me.”

The person still knocking refuse to give the door a rest.

“Just make sure you hold true to those words woman.”

A man in a black trench coat stood at his door. He looked back at Zaniyah. He could not account for her presence.

“Could I help you with something man?”

Tango palmed Marcus’ door and tried to push it open.

Marcus lifted his weapon and pointed it at Tango’s face.

Tango held his hands up and stepped back.

Tango looked at the man’s weapon now aimed at his chest.

“Now I’m going to repeat myself, and if your answer is not to my liking for disturbing a man taking care his business. Unfortunately, for you, this weapon in my hand, may accidently discharge; plugging the first thing in my way, your sorry fat ass.”

Marcus pulled the hammer back on his weapon and aimed it back at the center of Tango’s chest.

“I was looking for someone, and the tracer on her cell phone places her at this residence.”
“And who may that be?”
“Zaniyah Delaro. How farther requests her presence.”
“So, he sent one of his goons to my residence to find her. I have every intention of blowing your dick off, however, I’m a fair man. Now, you can tell Mr. Delaro, his daughter is not here, and since you found this residence in your fruitless search, you show up here again. Your ass is dead. Do we understand each other?”
“You got it man.”

Marcus leaned forward and moved Tango’s trench coat flaps aside. He lifted the gun from out his gun holster.

“I hope you are licensed to carry this piece, if not, that’s a pending charge. Now get the fuck away from my door, now!”

Tango turned and rushed down the carpet corridor of Marcus’ loft.

Marcus stood in the hallway. He heard the freight elevator door lift, close, and then descend.

Marcus slammed the door close. He realized he did not take the time to set his alarm.

Marcus walked back over to the couch and lifted both couch cushions. He placed his weapon under one cushion and then the confiscated weapon under the other.

Zaniyah walked out. She was wearing her clothes, which were slightly damp.

“You won’t need those clothes upstairs in my bed.”
“I’m sorry, I have to go. I have just spoken to my father, and he was very upset.”

Marcus walked over to where Zaniyah stood.

“Zaniyah listen, we do not have to do anything, however, I would like you to honor your wager.”

“Maybe another time.”
“Yes, after the ballet performance tomorrow.”
“Ahh, about that.”

“Come on Zaniyah, at least honor your commitment to me.”
“How about I meet you there.”
“I will meet you in the Grand Foyer. Could you do me a favor and wear my favorite color, red.”
“I could do that.”

Marcus pulled Zaniyah into his arms. He kissed her tenderly on the mouth.

Zaniyah circled her arms around Marcus’ neck. She relinquished her emotions. She inched her face back and looked up into his dark brown eyes.

“I’m sorry for how the evening ended.”
“You can make it up to me tomorrow, and be advised, you still owe me that wager.”
“Fair enough.”

“Here let me take you home.”
“No need too.”
“Is that person who banged the fuck on my door escorting you home?”
“Yes, he is employed by my father.”
“As long as he understands. Your time from this day forward has been coveted by me.”
“I see that concept sitting well with my father.”
“Have faith in your future, and in me.”

Zaniyah leaned forward and quickly kissed Marcus on his lips.

Written by SweetKittyCat5
Published 6th Sep 2019 | Edited 7th Sep 2019
Like This?
Poems by Author
Author's Note
This is a chapter from one of my many published novels. I will be adding a chapter as fitting to celebrate life in general.
Comment
#passion
All writing remains the property of the author. Don't use it for any purpose without their permission.
likes 4   reading list entries 0
comments 5   reads 170
Commenting Preference:
The author is looking for friendly feedback.
Anonymous
- Edited 3rd Dec 2019 3:45pm
6th Sep 2019 2:46am
<< post removed >>

Re. When Love Calls (Chapter Three)
Solomon_Song
6th Sep 2019 6:23am
Tale of an interrupted moment that could come from a James Bond novel. I happened to read this naked, so not hard to get my mind into the scene you painted here.

Re. When Love Calls (Chapter Three)
JAZZMANOR
6th Sep 2019 5:55pm
I am imagining two dramatic encounters and both have the potential to be messy!

Re. When Love Calls (Chapter Three)
Jiminex
7th Sep 2019 9:08pm
You are a story teller cool. Loved this ill have to read over your some more