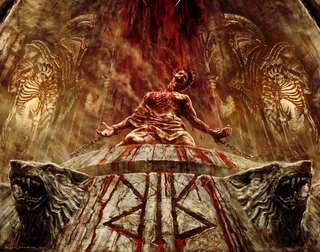 “Leaving non-transparent stains upon satisfied flesh
Lifetime STD burning, until receiving a dead rest,
“Manifesting like an unwanted disease
So like a two-dollar whore they fall to their knees,

“But are those praises and prayers even enough?
Or discarded like a napkin containing dried nut,
“Served to the sewage on a liquid plate
A feast for the rats-there is now no debate,

“Just a battleroyal for the nasty nourishment
Because those with a consumed sexual mentality contribute to hell’s rent,
“Possibly sealing their fate with universal hostility
Eternity fucked like demonic, nymphomaniac pussy,

“Wanted by many, but loved by few
Used and abused until the drained horned dick is through,
“Then forced again to perform the cruel rite
In an endless cycle night after violated night,

“Becoming part of a strict tradition and raping bylaw
Now the only way they want to receive it is painfully raw,
“Spread wide for all to gynecologist see
Providing for others unhindered opportunity,

“Public or private
The humiliation and torture no one will hide it,
“Illuminating not only the flesh, but the soul
Because a soul is more precious than gold,

Re: Re. Prostituted Doom
CasketSharpe
13th Sep 2019 1:40am
Have not written in this form in a minute.