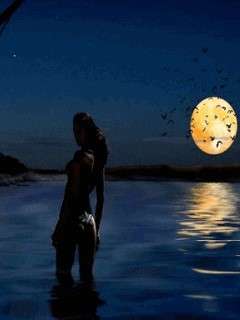 A Twist Of A Vampire’s Fate XXVIII

Naynina looked across the table at Dracon. She was tired of fighting her feelings from him. So, what he deems himself a vampire, with implanted vampire teeth. She wanted him with an unusual hunger.

“Baby, the waiter is addressing you.”
“I’m sorry.”
“Yes, pardon my manners.”
“Don’t worry baby, you will feel these implanted vampire teeth much later.”

The waiter cleared his throat.

“I’m sorry, I will have the medium rare steak, please.”
“And you sir.”
“The same as the beautiful lady.”
“Very well.”

The waiter lifted the two menus from off the table, secured both under his arm, and turned to walk away.

“You look absolutely stunning this evening.”
“Thank you.”
“I’m a patient man for your touch.”

And your blood he thought.

“You have some explaining to do.”
“Such as.”
“Handsome, do not play that coy act with me. I will ask you once again, and I expect the truth.”
“Ask.”
“Are…are you really a vampire? I am academically educated, and I do not believe in the concept I will ever see one in this lifetime.”
Dracon looked across the table; he enlisted Naynina’s eyes.
“Close your eyes and listen to my voice. I need you to block out everything, other than my voice.”
“How…”
“Close your eyes, Naynina.”

Naynina inhaled and exhaled. She slowly closed her eyes.

Naynina blocked out the background noise welcoming her ears within the restaurant.

“The year is 1400. During that time of civil unrest among a king’s reign. There was once a fierce knight who fought along some of the bravest men in all the land. This knight came to be knighted as a Viscount. He had taken a young bride, bequeathed to him by a beggar of a commoner, in exchange for safe shelter among enemies.
The woman was very beautiful, and that was just to look upon. The Viscount was blessed she was virgin, untouched. However, she was the daughter of a very old Fairy, and as you and I will come to believe. This virgin’s mother was the product a very evil force, a witch. The witch wanted the blood of the Fairy to sustain her existence, however, for that to occur, the virgin’s mother had to cross over. But before that feat could come to pass, the virgin’s mother had made a pact with the witch; she would give her blood and immortality to this witch, if her only living daughter could have immortality and retain all the supernatural properties, as a pure-blooded Fairy.”

Naynina glimpsed her life flashes in span as Dracon’s voice enwrapped her in the power of his vision. She saw her mother, why was she wearing such old clothing attire. She saw her mother running through a forest of greenery. She covered her mouth as she saw a witch lift an ax and behead her mother. She saw the life force being drained out of her mother by a witch. leaving her mother’s body flattened and then being carried away by the dust of the wind.

“Naynina, stay with my voice, release your emotions and just relax to the sound of my voice.”

“As time progressed. There was a bloody battle that ensued among several vampire clans. One individual from the Lasombra Clan, had betrayed the rules of the Federation Authority, by falling in love with the Viscount’s bride; who the Viscount had to ultimately battle to the death. The Viscount’s bride was killed while fleeing for cover. As she laid in wait. The Viscount had to choose to remain alone of give his bride the taste of immortality. In the beginning, the Viscount had appeared he brought his lady love back to life; when in doubt his bride would had risen in the stage of two days. Once he had assumed he turned her. She was taken from his attendance by the Lasombra Clan, only to be taken by someone within the Tremere Clan. This person is believed to have went mad. No one seems to know what became of this beautiful woman. Naynina, one thing I could say, I have felt your presence, heard your voice in the far corners of my mind. You are my wife, and I plan on keeping you near me in this century. The locket was a reassurance, you are the reincarnation, of my Naynina, and the name speaks for the true as such.”

Naynina felt confined within the darkness of a story she tasted so sweet, which once belonged to her.

Tears slid down her cheeks. She wept for the empty embrace of a mother; a mother, who she once believed abandoned her, only to come to realize, she scarified her life, so her daughter could continue to be.

Images of a man in royal attire she saw so vividly standing near her side. Then came slashes of angry darkness, tender lips she felt upon hers, a man’s scent she smells from afar.

Naynina saw herself dancing with Dracon in a grand castle; she was so sure he was telling her a serenading beautiful story, whispered in her ear.

The images of her illusion faded away.

Naynina opened her eyes. Her presence remained rooted in her chair.

“I…I don’t understand any of this.”
“Marry me, Naynina, again. Make my heart beat for you once again. I’m in love with you, I’ve searched countless centuries for you, I’ve found you, and by my will. I will not lose you to another.”

Dracon glanced around the restaurant.

Vacome, Vasile, and Valan stood near the maître d’ waiting to be seated.

Vacome discontinued speaking. He inhaled. He stepped around the awaiting patrons standing in front of him. He glanced around the restaurant. He sniffed the air once again; his vision followed his nostrils. He looked at the back of Naynina’s head. His eyes shifted, they bored directly into Dracon’s eyes.

Vacome’s hissed under his breath. His fangs descended.

Naynina’s skin became overheated. She looked around the restaurant. She lifted her dinner napkin and damped at her face. She looked over at Dracon. Who was looking over her shoulder.

Naynina placed her dinner napkin near her plate and stood.

Naynina turned and rushed away from the table. She made it to the bathroom door.

Someone was exiting as she was entering.

Naynina ran over to the sink. She palmed the sink and looked at her reflection in the mirror. She sniffed the air. She smelled the scent of Vacome’s person. He skin begin to immediately tingle.

“Shit, what the fuck is happening to me.” Her skin was on fire for Vacome’s touch. “Not now.”

Naynina turned on the cold-water faucet knob. She palmed some water and clumsily splashed it over her face. She reached over and fumbled to reach for a paper towel.

Someone thrust a paper towel in her hand.

Naynina turned off the water faucet knob. She straightened her posture and pivoted her head.

Vacome was leaning back against the wall, one foot over the other; his arms were crossed over his massive chest wall.

“Are you following me.”
“If I was.”
“I know what you are…Dracon has related the entire story to me. You are a vampire as well.”
“And you are a very sexy Fairy, whose blood and body I crave to have at my disposable.”
“I suggest you leave.”

Please, my inside is turning to mush with a need to have you deep inside of me.

Vacome uncrossed his arms and pushed himself off the wall. He walked up on Naynina’s presence.

Naynina quickly dried her hands and tossed the paper towel in the trash bin. She did not want him to see the hunger in her eyes.

Both stared at each other, no voices were needed.

Vacome wrapped his arms around Naynina’s waist. He drew her body close. He slowly sniffed in her aura. He leaned down and kissed her lips.

Naynina could not help herself. She rested her palms on the sides of Vacome’s hips.

Vacome held the nape of Naynina’s neck and pulled her into the force of his hungry kiss.

“Umm,” Naynina moaned under her breath.

Naynina was nowhere to be found.

Dracon sniffed the air. He smelled the absence presence of another vampire.

“Fuck! Our clans go to fucking war! And that bastard is dead!”

Dracon rushed out the ladies’ restroom.

Written by SweetKittyCat5
Published 11th Aug 2019
Like This?
Poems by Author
Author's Note
This is a chapter from one of my many published novels. I will be adding a chapter as fitting to celebrate life in general.

This is Chapter Twenty-Eight of Chapter Thirty or more
Comment
#fairies #ForbiddenLove #memories #mythology #vampires
All writing remains the property of the author. Don't use it for any purpose without their permission.
likes 4   reading list entries 0
comments 9   reads 191
Commenting Preference:
The author is looking for friendly feedback.
Re. A Twist Of A Vampire’s Fate XXVIII
nutbuster (D C)
11th Aug 2019 3:33am
sure is getting sexyer in this chapter love as the war of the clans is about to come to a head

awesome can't wait to see what happens next

Re: Re. A Twist Of A Vampire’s Fate XXVIII
SweetKittyCat5
11th Aug 2019 2:53pm
Thank you my love for taking the time to read and then comment, please enjoy your Sunday as well

Re: Re. A Twist Of A Vampire’s Fate XXVIII
SweetKittyCat5
11th Aug 2019 2:55pm
Tell your spouse, she is number one in my book, and thank her for the recognition. You two, take care, and thank you both for reading and you providing a comment. Have a blessed day you two

Read poems by SweetKittyCat5
Re. A Twist Of A Vampire’s Fate XXVIII
Stoney223
11th Aug 2019 11:18am
YOU HAVE PUT THE ICING ON THE CAKE WITH THIS STORY...FOSHO

Re: Re. A Twist Of A Vampire’s Fate XXVIII
SweetKittyCat5
11th Aug 2019 2:57pm
Aww...now that is the kind of comment that gets my butter rum jucies flowing before I go for a morning run... thank you for reading and then adding an uplifting comment, enjoy your day in its entirety

Read poems by SweetKittyCat5
Re: Re. A Twist Of A Vampire’s Fate XXVIII
Stoney223
12th Aug 2019 12:12pm
LIKEWISE QUEEN LOVE A WOMAN THAT TAKES CARE OF HER MIND AS WELL AS HER BODY AND SOUL..SMILE

Re. A Twist Of A Vampire’s Fate XXVIII
JAZZMANOR
11th Aug 2019 1:29pm
Bram Stoker would be smiling. One line kind of confused me, “Baby, could you excuse me, I have to use the restaurant.”  Did you mean to write “restroom”?

Re: Re. A Twist Of A Vampire’s Fate XXVIII
SweetKittyCat5
11th Aug 2019 2:59pm
Now that feels so right for the sweetest comparison, and yes my love thank your catching my gaff, I am wishing you the most awesome day and upcoming week