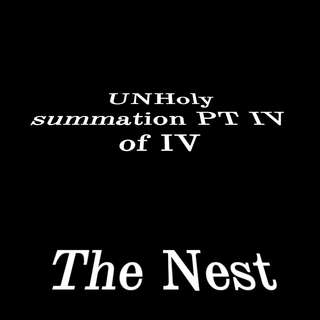 UNHoly summation of IV of IV

_____
From birth, Christian parents decide to craft the minds of and surrender their children for Christianity.
Christening
Baptism
1st Communion (Catholics)
Confirmation (Catholics)
Marriage
Life
Funerals
These are all supposed to be shaped by religion, especially in Christianity.
But, what if you are a young trans boy, trying to figure out who you are...which verse do you find in the Bible to help you with that?
Perhaps a heterosexual man who likes to crossdress-where do you find biblical comfort and guidance?
Perhaps you're a woman who likes more than missionary sex and doesn't want to wait for marriage to have sex--what verse can assist?
After having this religion chosen for you, now, you must shape your life according to it's sacred text-even if there are no provisions for people like you-so, suppress whatever is different from the gospel-be fruitful and multiply.
Christianity, is arguably a cult. You must follow their rules, you must make your children follow these rules and shape them as we say; and if they stray beat em' or leave 'em!
The Bible isn't parenting. It resembles a bully;
do what I say, or else.
_________
Most people, even now, are afraid or embarrassed of their lifestyle or sexual proclivities because of religion and judgement-which has nothing to do with sex and sexuality, and is as natural a thing to do as breathing.
Let Christians drive the narrative men may marry many and you must remain a virgin (women) until you are married.  Why?  How does that help her be a happy or better wife and mother? How does she know this man will be pleasing to her, and satisfying to her, if she doesn't test drive a few?  Oh yeah, it doesn't matter what she wants, after all, it is that wicked female who caused man to sin-so, just take childbirth as a forever punishment and God and Adam give dap on bro's before ho's…
that's really about the size of it, man is to have dominion over all including women.  Who does the Bible name as head of the household even though it's mostly a woman running it?

Christianity and it's Bible;
this is where the zealot flock settle with their young.  It has been so embedded in people it's like poking a hornets nest when you question things about it or offer alternative suggestions about things that seem so illogical.
It is straight up attack mode instead of plausible reasonable human inquiry.
Anyone else notice that Christians who claim it isn't their place to judge people-always put themselves in a position of hierarchy to judge people?
There are many confusing and hypocritical writings in the Bible-and no provisions for LGBTQA at all.
This dissertation was to simply open a window or two into alternate possible explanations for things and to be comfortable with who you are, takes love, parenting and guidance, not Bible verses.
I don't believe it's right for people to choose someone else's religion-even their children's; it can truly cause more damage than can be measured.
People should be allowed to be who they are sexually without concern or judgment (Not pedophiles).
No one sits their parents down to say they're heterosexual-why is it homosexuals need to come out to people-instead of people just figuring the shit out eventually?
In essence, don't have blind faith in anything without first questioning it exhaustively.
Don't turn your children's lives over to tenets of Christianity with no possible divergence, that's a robot or a cult.
People should feel free to question something that was more than likely chosen for them by someone else.
Curiosity is a natural occurrence; Christianity is NOT!

Written by SPIRIT (SPIRIT_Sinz)
Published 28th Jul 2019
Like This?
Poems by Author
Comment
#God #morality #philosophical #spiritual
All writing remains the property of the author. Don't use it for any purpose without their permission.
likes 0   reading list entries 0
comments 0   reads 134
Commenting Preference:
The author encourages honest critique.