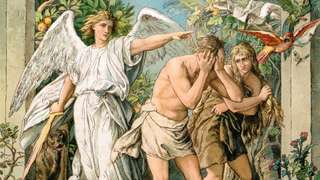 The Little You can Know

Without form and void,
The world gave a lunatic gaze.
Lack of luminous light love bought,
Darkness did give her a chase.
Open to no one was her,
Water beneath and air above.
Open to someone was the stars,
Lodging in authority's abode.

'Let there be light',
I saw the darkness did flee.
Off they vanished out of sight,
Coupled with unpleasant stuffs I couldn't see.
Her mood changed,
As soon as the light emerged.
With bright and lovely range,
They both adhered to his command.

Trees and seas,
Were in their period to display.
Cow and fish,
Did sprout as they said, 'We shall all obey'.
The beautiful monsters,
Did beautify and compliment the sky.
I mean, the sun and it fellow stars,
Changed her physique to an alluring type.

Entourage,
Of swamps and lovely garden.
Girded with courage,
Sauntered in to form Eden.
Emissaries,
Of hills and virgin mountains.
Muffled with tourists,
Did elongate the beauty and stretches of fountains.

Beautiful beauties,
All did constitute.
Even the maledroit earth embroidered with luxuries;
Heartily seemed to contribute.
See amidst the winter's snow,
The ugly vulture rested on the cliff.
See betwixt the summer's brow,
The creator a great job did.

Wow, in a glance, I saw a baboon,
Mighty, rugged and archetyped to 'kingkong'.
I wondered if it's a product of earth or the moon,
But I discovered that to the creator it belonged.
Fearful and wonderful creatures,
Saw I at the zoo of universe.
I wish I was there to behold the creatures,
Though, imagination did give me the traverse.

"Oh come,
Let us make,
Man in our own 'crum".
The creation steps were given a break.
A jury of elders were assembled
To hung sands together,
Three chieves blew
Breath yonder.

'Oh no, he can't live alone! '
The creator did empathize him.
'Pull out his rib away from him,
After I'd issue him a death-sleep loan'.
2 pints of beauty were poured,
On her obscurity and gross scar.
A bone of a bone under her lord,
Making two 'shes' living at hand.

'East-west, Southward, let's plant it here,
No, overview, why not, overthere? '
An heart-taking garden of life,
Was planted for him, with which, he'll survive.
Trees, hills and humble lakes,
Did compliment the rays of the garden.
Lions, kids and jerky drakes,
Were covered by his words' shield.

But here was the tragedy,
A comedy and tragedy of life and death.
Life in death exiled from the garden,
Death in life, as by the apple the law was broken.
The varmint or so,
Succumbed the second she to his order.
'Eat the apple; or go'.
Indifferently she bit it, by which her eyes were murdered.

He with her,
Drenched in their water loo.
Sew a sac,
With which they covered their recently known naked hood.
--- 'Away from my presence, traitors',
Yelled the creator, beholding the abused.
'Between you both lies a separator,
The story continues.  ---

***   Goat skin, sandals and hoe,
Sweat, pain and strife.
Enmity, wand'ring and cries they owe,
Till the first 'she' whirls by and cause a new paradise   ****

Written by Joshuaberry (Ancestor)
Published 28th Jun 2019
Like This?
Poems by Author
Comment
#Christian #dark #devil #spiritual #vanity
All writing remains the property of the author. Don't use it for any purpose without their permission.
likes 0   reading list entries 0
comments 0   reads 118
Commenting Preference:
The author encourages honest critique.