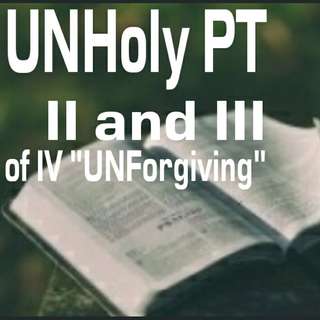 Still, to this day, there's no substantial role women play in the church's hierarchy.
The Bible is a white male-creation, white male-centered, white male-guided, white male written and taught text, handed down for centuries, which is long on fantasy--short on history.
Will explore that and the moral paralysis the Christian Conscience places on sex and sexuality in Parts II & III of IV of UNHoly.


Christianity, is a divergent fusion.
Christianity begins in the New Testament-old testament is part of Torah-Christianity says you keep waiting for your Messiah, we found him over here.  The Virgin mother or Madonna is a complete rip-off of the African queen ISIS and baby Horus, which in fact, is still prevalent in most European and South American churches.
A man made prolific cult-that dictates every aspect of life, including something it should never control-sex and sexuality.
Women, children and the LGBTQ community should be unforgiving of Christianity's male favored, male centered laws.  Ones like-
a woman keeping a rapist's baby-even an incestuous baby-rapists in some heavy Bible belts-rapists can even sue for custody and visitation.  These states would rather teach a child about Jesus and spiritual concepts kids couldn’t possibly grasp—instead of teaching a child about pedophiles which is the more beneficial of the two lessons.
Pedophiles get soft time-as if it’s a nothing thing-when they should be given automatic life sentences, because exactly when does the child recover what was stolen? When do they ever forget? Pedophiles receive privilege of separation to protect them in prison…. Protect them?  What about if they didn’t molest or rape children, they wouldn’t
need such an accommodation as the ideal?
Gay, Lesbian, Transexual, Bi-sexual—
There are NO provisions for you; you are an abomination and easily dismissed.
When Christianity intersects with the law-women, children, and  LGBTQ individuals  are the losers-and should be unsupportive and unforgiving of the damage this causes.

This is where danger lurks-behind Christian dogma.  There are actually no provisions for LGBTQ people in any religious text, as there are none for victims of rape or incest, or any that deal in depth with sex and sexuality; however, American laws are Christian crafted with one brand to emerge victorious--men.
Terms like rape, incest, and pedophile are unfortunately used so tirelessly that many become numb to the true meaning and impact of such despicable behaviors.
Where is a confused trans-sexual child to find comfort and guidance?
A raped 12 year old who is pregnant by the rapist-where can she turn for real answers and not dictated dogma? Not the Bible that’s for sure.
SHAME is placed on victims while the dynamics of the law catch up at a slug’s pace.
Rape-is the forceful violation and penetration of a person’s genital or anal area without their consent.  Imagine someone taking a broom stick, and forcing it into either your vagina (for women) or anal area for either sex
Rape means that the violator is a vile predator and a sorry excuse for a human being.
So, why do states have laws that allow rapists to halt an abortion, sue for custody and visitation, and victims to be violated again-by such outrageous laws?  Who is saying that a rapists would make great parents?
One would need to examine where such laws originate and are upheld for answers and other revelations.
Incest, is the sexual union of closely related family members-like a grandfather having sex with his daughter, son, granddaughter or grandson. That is fiercely despicable!  However, if a daughter or granddaughter becomes pregnant with her father’s baby, she shouldn’t have an abortion according to the Christian Conscience-no matter what she has gone through, she should be fine giving birth to a constant reminder of her violated self-no problem.
Are you kidding?
For those who identify as LGBTQ, you’re deviant, unnatural, and a sinful mistake-your biblical verse to assist in your journey is…
oh wait, nothing to see here!
You’re bound by Christian dogma directly or indirectly.
I’ve known people who have denied their true selves, to please others, especially a mother or grandmother who follows Christianity.
So many people resist living out their fantasies and proclivities in fear of judgment and ridicule.
Good old missionary sayeth the book, anything varying is Sodom and Gomorrah.
Again, are you kidding?
There is a generational stranglehold Christianity places on sex and sexuality which stifles growth and discovery--when sex and sexuality are the most natural of human essences.
It is dangerous using 1 set if principles to judge a vast myriad of different people.

The relationship you have with your Creator, is a personal thing that is broadcast in your actions and disposition. It is your conscience, not the Christian conscience that should guide you.
That’s where spirituality emerges-when you accept what works for you and your life according to your conscience which is God speaking to you-through you.
If you're not in tune with your own conscience what are you listening to?

__
Brief summation of the UNHoly trilogy in Part IV of IV.

Written by SPIRIT (SPIRIT X)
Published 16th Jun 2019
Like This?
Poems by Author
Comment
#Christian #morality #philosophical #religion #spiritual
All writing remains the property of the author. Don't use it for any purpose without their permission.
likes 1   reading list entries 1
comments 0   reads 304