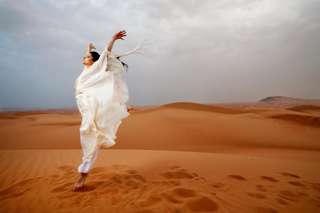 tango in the sky

the sky watched the lonesome wind blow through the canyons
pushing the river forward across little pebbles in the river beds
with a heavy sadness, he realized the river was married to the rocks

finally, he blew over the parched desert lands
stirring dust devils and tangoing in the sky
he found his soul mate there in the badlands

the wind and the lonely desert were one from the very beginning
he blew across the open dunes this became their sacred place
the place they would never forget...where they shared their first kiss
she flew across the lands at great speeds
free from her own confinement she sighed heavily

on bended knee, he asked her to marry him
within a whirlwind, they danced across the Earth
she said yes with a smile and a passionate kiss
then on a glorious night, they were married

making love to one another passionately
he blew her to the mountaintops then to the sea
their children now apart of all the splendor on Earth
part of the soil, trees, flowers, and the very sands of the beaches
kissing the faces of mortals as the wind and his beloved tango

the sky watched on and had peace...everything was as it should be
he no longer worried for the lonesome wind
eternally in the arms of his cherished lover until the very end

Written by crimsin (Unveiling)
Published 1st Jun 2019
Like This?
Poems by Author
Comment
#beauty #desert #love #wind
All writing remains the property of the author. Don't use it for any purpose without their permission.
likes 7   reading list entries 2
comments 12   reads 201

Re: Re. tango in the sky
crimsin (Unveiling)
1st Jun 2019 12:27pm
yay you kind of inspired this with your poem yesterday 😊 thank you beautiful for the love...

Read poems by crimsin
Re. tango in the sky
Summerrain75
1st Jun 2019 3:26pm
Wow Brenda this is a beautiful love story.<3

Read poems by crimsin
Re. tango in the sky
PandoraUnleashed
1st Jun 2019 6:30pm
A most beautiful love story! Reminds me of Zephyrs's westward winds.💙

Re: Re. tango in the sky
crimsin (Unveiling)
1st Jun 2019 6:46pm
thank you beautiful Pandora the Greek God over the westward winds wonderful...

Read poems by crimsin
Re. tango in the sky
DanielChristensen (The Fire Elemental)
2nd Jun 2019 1:57am
This has the kind of story flow structure, with a deep meaning thusly imbued, of Khalil Gibran or Paolo Coehlo to me. Each stanza with it's own meanings, connecting to those prior and following. I was drawn in. Terrific work. 💖🙏

Re: Re. tango in the sky
crimsin (Unveiling)
2nd Jun 2019 7:02pm
thank you graciously dearest Daniel for the beautiful compliment...