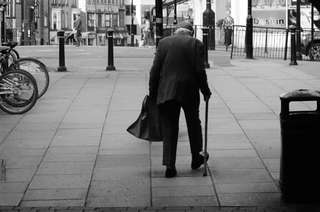 Anybody who says age is just number needs to take a look at ol' Sam all swole from steroid medication or Kenny with cancer on his face or Sandra with circulation problems that won't even let her walk to the mailbox anymore -- needs to take a gander at JD who still smokes despite his emphysema because a man's got to have some sort of pleasure even if it kills him.

Age is like a microchip planted via the conspiratorial sugar cube vaccine you took as a kid. It sets a timer insuring a steady income for those in the pharmaceutical industry, guaranteeing a lavish retirement for hospital executives, and helping the good doctor make payments on his yacht.

vitiate - Thank you! for teaching me a new word today.

Ouch. This write will linger in the reader's memory. Well done.

Re: Re. Age Ain't Just a Number
javalini
22nd May 2019 4:56pm
Thanks for reading.
It's actually an effort at "prose poetry."
I read a book about prose poetry -- The Rose Metal Press Field Guide to Prose Poetry.
Reading a book about a thing can be dangerous.
Some thought went into the rhythm of it, and some other aspects that might be considered poetic devices but...you're probably right.
Anyway, thanks again for reading. Your comments are always appreciated.

Read poems by javalini
Re: Re. Age Ain't Just a Number
JohnnyBlaze
22nd May 2019 6:59pm
Well, I would consider it "great prose" because you invested "poetic elements" into it that made it extremely engaging as opposed to the usual He said, She replied, Reader yawns.

I can imagine you writing a novella of a hundred pages or so that people wouldn't want to put down.

Read poems by javalini
Re. Age Ain't Just a Number
PoetSpeak
31st May 2019 10:50am
The older I get, the less I sleep
Seems a shame we need sleep at all
Fine entry

Re. Age Ain't Just a Number
javalini
31st May 2019 3:03pm
Thanks, PoetSpeak.
Aging is an amazing experience.
Thanks for reading and commenting.