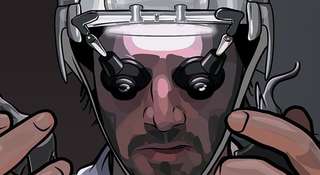 [It's time Kay] I knew it was time, I had to go back in. I'd been procrastinating, distracting myself, going back to the datastream, to him, had been gnawing on me, haunting me, I had to face the fear of going back again, the uncertainty, trepidation. If pain was the blueprint of our system then fear was definitely a background programme constantly running, sometimes coming to the forefront to overwrite whatever it wanted, controlling, seizing, maintaining the status quo.

I had no idea what I was going to tell the commander, I'll skate by on some half-baked lie again no doubt. I've given no one in PsyCorps, Sector 9 or the commander any reason to question my motives, slipping under the radar may be possible.

I go down at night when I'm least likely to be called out on a job, the place still reeks of piss, I suppose that's something units get used to in time. There's a moment of hesitation, I feel that stomach-wrenching sick feeling that comes when danger is close. My senses are all online, I can see, smell, hear everything in my surrounding, so when the Rivian appeared in the portalway I was stood next to I was startled and reached for his throat. Realising who it was I released him immediately.

"Fuck, you had my arm last time, I thought you were going to take my head this one".

I glanced at his replacement arm, upcycled old shit. "Sorry about that, first time jitters".

"You here to renter or bust it open?" He enquired.

"Plug me in Geralt".

"Who?" His puzzled look made me remember I had a whole bibliotheca of shit most units don't register.

"No, we don't need the valerian this time, you're a willing participant. Upgrade!"

"Nevermind", he echoed my retort back to me.

He got out the catheter and I lay down, opened my legs and he lubricated the end and inserted it into the urethra. I felt a cold stream of liquid, the most bizarre sensation and then I began to enter the hypnagogic doorway.

"Aaahhh, that's better", the words manifested without vocalisation. I felt like I had connected to a very familiar feeling. Unlike the sensation I felt when coming out from the dreamscape this time it felt like an awakening, like the lights had been switched on and I could now see everything. I noted how strange it was because when in the outside I would never have registered the opacity of it unless I'd experienced this.

I had no idea what that voice would do to me when I heard it again. Relief, a sense of coming home, a feeling of being safe. And also a feeling I couldn't quite define, or discriminate.

"I got lost on the way back here", I joked. I felt guilty for some reason, as though I owed him an explanation why I'd taken so long to return.

"You forget Kay, time works a little differently here. Eventually you begin to stop counting arbitrary minutes and hours. It's good to have you back".

I felt him laugh. It made no sound but it was like a spike of joy and amusement pervaded the dreamscape. It felt amazing.

"I'm not sure why I'm here, or what I am supposed to do here". I conveyed wordlessly to him as is the method of communication here.

"Kay, we need to get to work. You have much to do". His tone was soft, yet powerful and commanding. Fuck, I'd missed hearing that voice directly.

"You've left Plato's cave. Now you need to go back in eyes wide open. We need to expose the outside for what it is. A prison. And PsyCorps are the jailers".

I thought for a moment how everything I'd been led to believe was a lie. I'd been told the dreamscape was the corruption. It was exactly the opposite. I could see that now.

"Okay, tell me everything".

Written by Sky_dancer (A girl has no name)
Published 20th May 2019
Like This?
Poems by Author
Author's Note
Back online.

https://deepundergroundpoetry.com/poems/340033-kernel-version-unknown/
Comment
#philosophical #scifi
All writing remains the property of the author. Don't use it for any purpose without their permission.
likes 6   reading list entries 1
comments 8   reads 190

Commenting Preference:
The author encourages honest critique.
Re. Kernel Version Unknown .12
AspergerPoet56
20th May 2019 6:09pm
This could end up being a book

Re: Re. Kernel Version Unknown .12
Sky_dancer (A girl has no name)
20th May 2019 6:47pm
I had to reread the others to reacquaint myself with it. I might have to focus on it exclusively if I'm going to get a book out of myself :/

Read poems by Sky_dancer
Re. Kernel Version Unknown .12
PandoraUnleashed
20th May 2019 9:14pm
I've yet to comment on any of them as I read them back to back way back when. Glad to see it return!!

Re: Re. Kernel Version Unknown .12
Sky_dancer (A girl has no name)
20th May 2019 9:26pm
Yeah, I felt it was time to get back to it. I reread them myself today about 3 times to recap. I made notes this time and directions for the future episodes. Thank you for your support Pandy!

Read poems by Sky_dancer
Re. Kernel Version Unknown .12
DanielChristensen (The Fire Elemental)
21st May 2019 5:47am
I so love this, it is, to me, on the level of cutting edge thought that Jules Verne once occupied, A Clockwork Orange, Fahrenheit 451. It is so prescient, relevant, original, poignant and enthralling. You're an amazing writer my friend.

Read poems by Sky_dancer
Re. Kernel Version Unknown .12
goldenmyst
27th May 2019 3:53am
Sky this is an imaginative work which dazzles my mind. Your knowledge of sc go lingo is stunning! And the ending is incredible. The lie is uncovered in a twist with the best of the genre. You are a giant among us. John