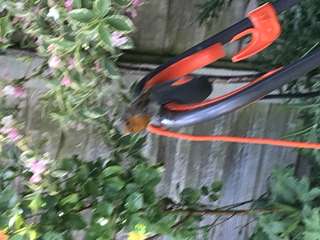 The grass had been cut,
the daisies had their heads lopped off
but were not defeated
and would be back in time,
The bold breeze had died down
giving way to warm sunshine
a truly pleasant Summers day,
While I went about rolling up the lawnmower's cable
a Robin Redbreast flitted by to land on the newly cut lawn
all was still and peaceful
only the soft murmurings of life in the background;
I looked at the robin
and felt nothing
except than the simple serenity of a job well done
and the slightly buoyed up mood
of happiness in a lull,
I watched the robin
and it hopped around
to sometimes watch me with a side on glance,
there was no whisper in trees
speaking in tongues with the winds of fate
no sudden epiphany
or half-heard, half-felt herald to an apocalypse and change;
just me wrapping up an orange cable
and an inquisitive robin
that would flit from on the grass
to perch on the conservatory's gutter:
a bird and a monkey
both aware of each other
but more than happy for the other to carry on their business
nothing said other than an utterance of
"Can I help you?"
with earphones in possibly the Robin did not hear me
regardless it not heed me or prompt further conversation,
so I finished my task
putting the lawnmower back in the shed
last I saw the Robin it was hidden in the leaves of the apple tree;
We parted without a goodbye or glance back
onwards to our merry way
with no thought of meeting another day.
Perhaps it meant something,
or perhaps it was little more
than an oasis of peace
a meeting of man and nature
amongst the modern world.

Image is a somewhat blurry photo of that very robin perched on the lawnmower taken with my phone.
Show Less
Comment
#animals #birds #fate #nature
All writing remains the property of the author. Don't use it for any purpose without their permission.
likes 9   reading list entries 1
comments 10   reads 252

Commenting Preference:
The author encourages honest critique.
Re. A feathered visitor
JusTim_
16th May 2019 6:44pm
This reminds me of my morning, loping off the dandelion...it is mating season for the Robin, she was probably getting some bedding for the nest.

Re: Re. A feathered visitor
Viddax (Lord Viddax)
17th May 2019 10:50pm
Could also have just thought the orange lawnmower was a large cousin; didn't seem to take anything away apart from an impression.

Read poems by Viddax
Re. A feathered visitor
shadow_starzzz
16th May 2019 6:49pm
Yes, it does; mean something.

Animals, and the presence of such are very telling when they emerge like that !

This reads as something applicable to my life right now. Coincidental, perhaps.

Re: Re. A feathered visitor
Viddax (Lord Viddax)
17th May 2019 10:54pm
With some research the robin can signify the spirit of a close loved one coming to tell us to move on, thankfully that wasn't the case, and it was more likely to be a signal to be brave for the future.

Read poems by Viddax
Re. A feathered visitor
Sky_dancer (A girl has no name)
16th May 2019 7:50pm
Yes, when I mowed my clover all the birds came for the after party. OMG, I absolutely love robins!

Re. A feathered visitor
Josh
16th May 2019 9:44pm
I love it when birds visit. It's a special moment. We had a hoopoe bird the other day which I tried to catch on camera but I was too slow. The poem really gets into the whole interaction in a solid way - nice.

Re. A feathered visitor
alcedoathis
16th May 2019 10:07pm
Both parties going about their daily chores. Lovely description and mutual respect shown by the 2 heroes in this little vignette.
Very pleasant. Did you go for stripes in the lawn?
Dan

Re: Re. A feathered visitor
Viddax (Lord Viddax)
17th May 2019 10:52pm
No fancy artwork with the grass, just cut it all so that is uniform apart from the edges which are safe in the shadows of the slab border.

Read poems by Viddax
Re. A feathered visitor
snugglebuck
16th May 2019 11:31pm
A Robin in your yard reminds us that God didn't make the planet just for us.
Liked. 👍

Re. A feathered visitor
SweetOblivion
17th May 2019 00:07am
A lovely moment - beautifully captured