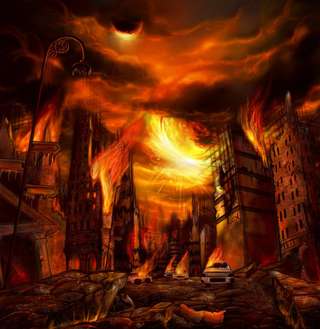 we all want a life of peace
and I would argue that it's the same vision
yet we let this power struggle divide us
following views that don't reflect who we are
how can a person I call friend,
support a man who hates my skin?
yeah I get it
too many sheep and not enough thinkers

hard to believe that people just follow
another life dead so we just accept
did you know a kid today became a hero?
all it cost him was his life
accept that it's just the way things are
it's not like we have no say in the matter
but our one voice gets wasted voting in crooks

I know, no one likes to hear politics
but it's the ignorant that will kill us all
people get all gitty over a sells man
selling us posion and calling it the cure
how I see it
we only have a few great moments in time
and we're wasting this one
a chance to show we can swim in turbulence
instead I fear we will sink
drowned by our own created oblivion

Written by DevilsChild
Published 14th May 2019 | Edited 15th May 2019
Like This?
Poems by Author
Author's Note
https://youtu.be/IXRFZNpQ_dQ
Comment
#dark #earth
All writing remains the property of the author. Don't use it for any purpose without their permission.
likes 4   reading list entries 2
comments 3   reads 420

Commenting Preference:
The author is looking for friendly feedback.
Re. Divided We Fall
shadow_starzzz
14th May 2019 11:36am
The only thing that can change the tide is resistance on a mass scale is a revolution but first we need to strategise and build an alliance of allies.

Allies, that are also being screwed over from different perspectives.

I love that you’re ‘awake’ with eyes that pierce the soul.

Re. Divided We Fall
SerenitySongs
14th May 2019 3:08pm
Nice to see your not seeing with eyes closed