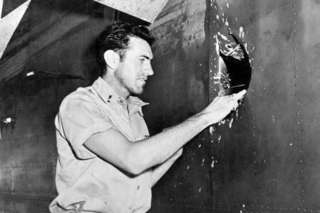 The B-24s, the Liberators,
The Second World War’s incinerators,
They dropped bombs all over the Pacific,
They were key to winning the war,
Legendary amid the corps,
They created a hell on earth that was horrific.

But the service men called them “flying coffins”,
Odds of surviving these missions weren’t too great,
And of all the glories of the men who told their stories,
This is the account of Super Man’s crew and their fate…

Phil and Cuppernell piloted the plane,
Lambert in the tail, Nelson along for the ride,
Brooks and Douglas were the waist gunners,
Exposed on the plane’s sides.

Glassman in the belly, Mitchell in the nose,
Pillsbury was the top turret gunner,
And Louie was the bombardier,
(He had been in the Olympics as a runner.)

Twenty three B-24s took off before dawn that April morning,
Deployed to destroy the enemy’s supplies,
Super Man led the way with the others on the wing,
On a mission sure to bring the adversary’s demise.

It was right after the bombing over the island of Nauru,
As the planes turned around heading back to base,
Japanese fighters converged on the bombers,
A vicious dogfight was about to take place.

The gunners fired away with all their fury,
The Zeros fired back and the tracers flew by,
Many bullets penetrated Super Man,
It was hell under a beautiful sky.

The plane rocked and twisted under heavy fire,
A cannon round struck Super Man in the tail,
Shrapnel tore into Lambert’s hip and leg,
They were unsure if they could prevail.

In the belly Glassman had been hit,
Two hunks of shrapnel penetrated his back,
Adrenalized the gunner didn’t feel a thing,
But Nelson had been hit during the attack.

Then a shell blew a hole near the top turret,
Metal debris and blood was everywhere,
But yet somehow the top turret gunner carried on,
Pillsbury’s foot and knee were torn to shreds.

Louie went to help Brooks who was bleeding,
Lying on the catwalk over the open bomb bay,
As he dangled Louie pulled him back to safety,
But Brooks was hurt badly in the fray.

Douglas and Pillsbury still manned the guns,
While the other bombers encountered flak,
The two gunners kept their eyes open,
As two more Zeros moved in on the aircraft.

Pillsbury still wounded, his foot dangling,
Had a furious look on his face as he scanned,
He spotted the Zero coming toward them,
Thinking, I have to kill this man.

The Zero pilot drawing near hesitated,
That’s when Pillsbury shot heavy rounds,
The tracers penetrated the cockpit,
And took the Zero down.

A second later Douglas at the waist,
Shot down the last of the Zeros,
And if the plane made it back,
The crew would be hailed as heroes.

Still it was a five hour flight back to base,
Running out of fuel and with no landing gear,
Half the crew was injured and the plane was shot to hell
But crashing in the ocean was the biggest fear.

Louie bandaged and took care of the men,
While the pilots managed to fly the plane,
Most of them bleeding, one of them dying,
None of them would ever be the same.

Phil and Cuppernell made a hard landing,
The plane stopped at the runway’s end,
And all twenty-three B-24s made it back,
Though none were shot up as bad as them.