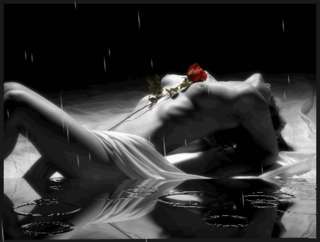 “Dammit, I said crawl. You whores can’t comprehend basic instructions.”
Ragan crawled up to the woman’s gaped legs. She looked down at her pinkish clitoris showered under a mat of soft dark-auburn downy hairs.

Ragan grabbed the woman under her bent knees and pulled her lower body down to the edge of the settee. She divided the soft skin of the woman’s pussy and licked the path of her clitoris. She snaked her tongue inside the inner folds and suckled the soft flesh.

Vaginal juices accumulated in the back of Ragan’s throat.
Ragan spit the juices on top of the woman’s downy hairs. She kissed the perimeter of her pussy, and then kissed over an inner thigh.

Ragan lifted the woman’s skirt higher. She kissed over her flat abdomen.
The woman wrapped her legs around Ragan’s back. She attempted to push Ragan’s head back down to her pussy.
Ragan grabbed a hold of the woman’s hands and bound them above her head. She detained her wrists with one hand and ripped open the woman’s silk blouse with the other.

The woman arched her back as the cool air swiped over her bare breasts.
Ragan kissed over the woman’s light-brownish nipple. She teased the other breast nipple between her finger.

“Ohm, you sure you haven’t done this before.”

“Oh Nadia, stick your finger inside my wet pussy,” she mumbled between their lips.

“Oh Nadia, you’re making my pussy hunger for your tongue.”

Ragan’s tongue glided up the woman’s body slowly. She mouthed the woman’s breast nipple and suckled it as she jammed her finger inside her anus deeper. She slid her tongue up and down her cleavage; she coiled it around a nipple, lapping at it. She then slithered her tongue back down the woman’s stomach.

“Uum,” the woman gasped, she uplifted her body.

Ragan kissed over the peak of the woman’s other nipple; she jiggled the tip of her tongue over the perfect slope, and then slowly skated her tongue back down her body.

The woman placed her palm on top of Ragan’s head, and shoved her face down to her pussy.
Ragan teased, flogged, and flickered her tongue over the woman’s dampen cove. She stuck her fingers deeper inside of her, and then integrated her tongue; she worked the trio in and out the passage of her pussy simultaneously.

The woman arched her back, gripped a fistful of Ragan’s hair and gyrated her pelvis against Ragan’s face. She sandwiched her breasts together and licked over one nipple; she then licked over the other.
Ragan wiggled her tongue inside the woman’s pussy side-to-side, palmed her hips, and pulled the woman’s pelvis into her face.

The woman mashed her palm down on Ragan’s head. She suffocated her face into her crotch; she grabbed the back of the settee with the other hand and seesawed her pussy against Ragan’s mouth.

The woman pressed her hand down on Ragan’s head; she wildly rotated her pussy against Ragan’s mouth. She linked her legs around Ragan’s neck, grabbing a handful of her hair.
The woman’s vaginal muscles crowned and then relaxed; her vaginal juices tumbled down the back of Ragan’s throat.

The woman rested the back of her head against the settee.
Ragan suckled the woman’s climax.
The interior of Ragan’s mouth became moist from the liquidly residue.
Ragan lifted her mouth and kissed the woman’s clitoris. Her tongue made a pathway up her ivory skin; she kissed over a breast nipple, leaned back, and then spit the essence on the woman’s nipple. Ragan leaned her head downward and suckled the glistening juices. She gathered her breasts, nipped at one nipple, followed by the other.

“Oh, that feels so good,” the woman moaned.

Ragan licked up the woman’s cleavage, under her chin, to her awaiting lips. She blanketed the woman’s mouth, transferring her saliva into the woman’s mouth. Ragan lifted her mouth and inched back; she instantly stood and walked over to the sink. She leaned forward and spit inside the porcelain basin.

“I think I will be seeing you on a regular basis. You have such an amazing skill with that wicked tongue, I will pay a hefty price for any night, and I want you in my bed, not my husband’s bed, but mine.”

“Don’t count on that affirmation; this required service is for tonight only,” Ragan tossed over her shoulder.

“Nadia, my husband is a very prominent man. What I want, I usually will get. Come here.”

Ragan turned around and walked back to where the woman sat.
The woman centered Ragan between her thighs. She kissed her abdomen. She stuck her finger inside Ragan’s pussy and then rubbed it under her nostrils. She leaned downward and tinkled Ragan’s clitoris with the tip of her tongue. She planted small kisses to the mound of her pussy. The woman buried her nose in the wet opening of Ragan’s pussy and slowly inhaled the scent of her cunt. She kissed over her clitoris, licked up the lining, and then retracted her face. She pulled Ragan by the back of her buttocks and pulled her forward.
Ragan planted a foot on the cushioned settee.
The woman darted her tongue inside Ragan’s pussy.

Ragan cupped the back of the woman’s neck and drew her mouth into the gulf of her pussy. She leaned forward as the woman slowly leaned backwards.
Ragan persistently thrust her pelvis as the woman arrowed her tongue inside her pussy.

The woman palmed the sides Ragan’s thighs and twisted her tongue inside of her; wetting her silken folds.

The woman’s tongue escalated in giving.
Ragan held the woman behind her neck, danced her pussy hole on her tongue, and held her pelvis in place.

“Umm.” Ragan rubbed over the sides of the woman’s face.

The woman kissed around Ragan’s saliva dripping pussy opening. She kissed Ragan’s inner thigh and then stood. Her skirt fell to her knees. She grabbed Ragan by the back of her head and tenderly kissed her; she spaced her face.

“I will no doubt be seeing you again, Nadia.” She squeezed one of Ragan’s breasts, dipped her face and licked over the nipple.

Written by SweetKittyCat5
Published 21st Nov 2018
Like This?
Poems by Author
Author's Note
Sex is more exciting on the screen and between the pages than between the sheets.

Commenting Preference:
The author is looking for friendly feedback.
Re. The Ladies Room
hackerstacker
21st Nov 2018 5:29am
wow was not there to watch this sure that i be some sexy site
as be as hard as a rock hiding in the next stall watching all
Hot write

Re: Re. The Ladies Room
SweetKittyCat5
21st Nov 2018 5:33am
Aww, its late my love but thank you so much for reaching out with the first comment. Goodnight and may we both see a better tomorrow😊

Re. The Ladies Room
Lookawaynow (Rose)
21st Nov 2018 6:16am
My last write has a picture worthy to be here lol
Good luck with keeping your one up

Oh such salacious imaginative mind you have
I'll revisit this one later tonight for sure!

Re: Re. The Ladies Room
SweetKittyCat5
24th Nov 2018 10:11pm
And I just best you were the one I heard clapping the loudest

Re. The Ladies Room
CasketSharpe
23rd Nov 2018 11:30am
Made that pussy act a fool after all that begging.

Re: Re. The Ladies Room
SweetKittyCat5
24th Nov 2018 10:08pm
Begging brings out the most sexuality in a woman, the passion behind the sweetest rewards is sometimes worth it. Thanks for reading and then commenting as well

Re: Re. The Ladies Room
SweetKittyCat5
11th Jan 2019 6:37pm
Then hold the camera steady and no peeking the next time...wink

Latest Forum Discussions
COMPETITIONS
Me
Today 11:35pm by PoetSpeak
123
POETRY
Poems that mean something to you
Today 7:26pm by Morbs
SPEAKEASY
Music Thread ~
Today 7:16pm by Rianne
1 ... 3031323334
COMPETITIONS
Alive in Memory
Today 5:41pm by J_J_Jay_Jr
123
COMPETITIONS
Funeral: The Last Rites
Today 3:21pm by da_poetic-edifier (Damon)
123
COMPETITIONS
When I was written
Today 2:35pm by Rianne
Follow Us