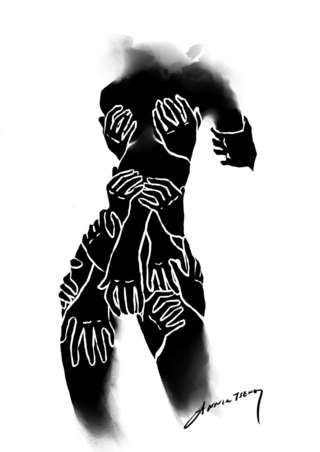 Didn’t ask for it but you gave it to me anyway.
Carrying this pocketbook made the boys look at me funny and,
I had to learn to bare the weight, wanting to be among-st them til you taught me about the worry of
Protecting the jewels it encased away from smooth tongues and perversions.
And you swore me to keep it that way until someone came along to deserve it
But like always I was in a rush, I messed up and lost it in the backseat of someone’s car momma

I LOST MY POCKETBOOK.
Almost as if I gave it away, I had no idea with how close he became that it was slipping from around me,
That his neediness of what I had would creep up from behind me and,
Persuasively he begged and begged until he slipped his hands inside and felt all the wealth I have to give momma I gave my pocketbook to him
I can’t come home without it, the second you lay eyes on my you’ll know that somethings missing
Just to keep it hidden I’ll silence the sway of my new walk, so the drum of my hips don’t get your attention
or the veterans that can sense now sniffed it out and act different now, predators and vultures and my flesh is what they’re preying on now that my pocketbooks gone.
One look was all it took for him to get close enough to assess it.
Against my better judgement I opened up and neglected every lesson you installed in me about keeping it protected.
I LOST MY POCKETBOOK.
Not only that.
The problem is I think I want it back, but it’s too late for that
The innocence and security that I once had all vanished when I handed over that bag
Please don’t be mad
Don’t tell dad.
I LOST MY POCKETBOOK

Re: Re. Precious Pocketbook
KayBeeMapes
19th Oct 2018 10:20pm
I appreciate you taking time to give such an in depth review

Read poems by KayBeeMapes
Re: Re. Precious Pocketbook
FreeLove87 (SamuraiEde)
19th Oct 2018 10:35pm
no problem I find thats what you really need to become better and stay encouraged with your writing plus we usually write from our hearts and words are what the heart deserves :)
WELCOME TO DUP!

Re. Precious Pocketbook
Anonymous
20th Oct 2018 00:40am
Echoing FreeLove87, I get your message and you are right! Everyone has the right to express themselves, their sexuality and anything else that makes them who they are. No distinguos. Hit it hard. It's time to step up. J

Re. Precious Pocketbook
Laluma
11th Apr 2020 5:19pm
This is a cautionary tale.
It just shows that children should listen to the advice of their wise parents who have walked the journey before them.
The virginity as the pocketbook gives a new meaning to this commonly used word.
The story is told very eloquently.