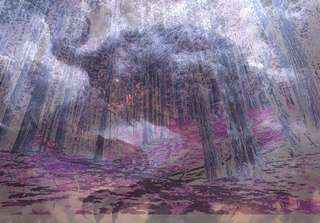 The Ghosts of Herak Part 8

Suddenly white light encompassed the whole compound; the light seemed to be made of little stars twinkling. Strange musical sounds came from everywhere; tinkling bells and summer rain. The twinkling light suffused the whole village and the people stood up, spritely and fresh. They looked around in wonder.

Ameria and I stood there in astonishment;  the Guardian had taken off his helmet showing his long golden hair. He spread out his arms and the whole world seemed to glow with a warm pleasant light.

Orcus and Desire stood shocked as wonder upon wonder unfold. Flowers of every kind grew around our feet and theirs. The fruit plants around put forth fruits and the tree leaves sparkled. They gasped and stood back from Pandora who fell in a heap of the ground.

“Go back to where you belong…the new gods compel you,” the fiery Guardian said.
Orcus who looked bewildered made as if to speak but stopped. Desire tried to laugh but choked instead. The ground underneath them opened up and they were gone, their shrieks of resentment and fury diminishing as the ground closed up again.

The Guardian tenderly held up Pandora, who was very weak. I ran to her and held her, but she could not respond as she was so weak. I saw tears in her eyes and knew that she was on the verge of dying.

“I will take her with me for she is very weak. Her life essence has been sucked almost to the finish by the two evil ones. I will heal her and infuse in her my spirit, so she can live. But she will be an immortal as I,” the Guardian said.

“Will we see her again?” I asked, clinging on to Pandora’s limp hand.

“No. Unless she wishes to be seen…she will be my Gaea. As her name is Grecian so will her immortal name be. She will be one of the new immortals…gods if you will. She will be with us forever.”

I cried while Ameria stood by me, her arms around my waist. I looked around and realized that the people had all gone back to their respective homes.

“It grows late,” the fiery Guardian said and in a twinkling of an eye they were gone. The sounds of bells and falling rain vanished. Only the flowers and fruits were proof of what had transpired.

I sat down among the strange flowers and bawled.

I never saw Pandora or the Fiery Guardian again. Ameria and I spoke about them sometimes, but mostly we kept our secret to ourselves. None of the villagers remembered anything, even the hauntings of Herak. They went about their daily life as if nothing had happened. Nobody remembered the black beans ritual and I didn’t pursue it either. Our village was peaceful and thrived well. In future, our village would be called Ameria. But that’s another story.

Written by Grace (Idryad)
Published 14th Oct 2018
Like This?
Poems by Author
Comment
#ghosts #monsters #mythology
All writing remains the property of the author. Don't use it for any purpose without their permission.
likes 2   reading list entries 0
comments 5   reads 317
Commenting Preference:
The author is looking for friendly feedback.
Re. The Ghosts of Herak Part 8
DanielChristensen (The Fire Elemental)
14th Oct 2018 6:08pm
That's a lovely story Grace. This installment was quite poetic. I tend to read philosophy or fiction with heavy, somber themes nowadays, but it is good to remember the power of imagination to uplift.

Read poems by Grace
Re. The Ghosts of Herak Part 8
HadesRising
30th Oct 2018 3:32am
Thank you for featuring me in your epic. I am deeply honored and as always you pen with a masterful quill. I would say good luck in the comp but I believe that you got this in the bag.

Re: Re. The Ghosts of Herak Part 8
Grace (Idryad)
31st Oct 2018 2:14am
You inspire me, Hades, in many ways, esp your poems. I may not comment but I read all of your poems. Thank you for dropping by and reading, it is of tremendous encouragement to me.

Read poems by Grace
Re: Re. The Ghosts of Herak Part 8
HadesRising
31st Oct 2018 2:16am
Just knowing that they are read, and maybe enjoyed lol, is good enough for me. I too my hat to you, Lady. You're an inspiration to us all.