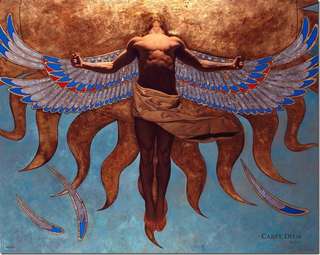 Saint of sinners or rebels Lucifer

Lucifer the saints of the sinners the humble beast of the vanity,
What have you done to upset the high to be burdened with such profanity,
The story is common of u once beloved now fugitive of the belief,
Or for the rebellious attitude they invented on you against the chief,

Its so strange to believe these story of the ancients scriptures,
Of who are you & what u did was a some big cooked-up failures,
I followed your story that they filled with glory & blasphemy,
All I know is neither they tagged you as a satan or an horned demon,

How the calculations fits to claim that he can rebel against the all-knowing present,
Even if he was prompted as the 2nd best to the one in the divinely event,
With every sect this version of his disgracing act & his induction of sins are different,
And they found no other place to impression him other than the this single earth,

All I can guess that he only symbolizes of a rebel against the order or sect it was entitled to,
To maintain the order they created directions upheld by the fear calming it came from the one in blue,
A fear that is propagate into an innocent conscious that is dried out from any gift to object or validate,
Obey blindly as believe in the above is always watching without any break,
done the deeds on his name and the benefits are ripped off by the heads of the snake,

it’s a simple management structuralogy to keep the rules made by some upon many,
& make us belief that even the heavenly celestial beings are plagued by political anarchy,

We came here to live and let live policy under the dominion of nature we call all giving mother,
Yet we made conflicting webs  social walls to keep safe the natural order that we find under logical explanation,
We traded self-growth & awareness with development & dependence,
A society that live under false promise of freedom, equality & justice,

As they very well explains to be with the Go$ we have to follow the rules,
To find the truth we have to negotiate with our conscious,
Only their true Reli#io# can bring salvation of souls with a promised seat in the heaven,
Trust in self-evaluation & philosophy of asking to know is a futile striven (effort),

I have learned that the divine creation in every were in each existing reality of every colour,
It neither favors any particular sect or heathens neither has any will to see us immortals,
Rule of the paper is orderly & safety living, the rule of the thumb is ‘rules & obligations of responsibility are only for the poor,
Rich & powerful are born with strategical immune,

I want to conclude this atheistic saga with iam not a Satanist or religious or a non-believer, iam a happy omnist,
who is dyeing from this tragedy that millions are alive but non are alive, restricted from well deserved reality & liberty to be happy.

Written by augustinomni
Published 23rd Sep 2018
Like This?
Poems by Author
Author's Note
This is not about Lucifer or Satanism, it's a fight,
Comment
#TruthOfLife
All writing remains the property of the author. Don't use it for any purpose without their permission.
likes 0   reading list entries 0
comments 0   reads 206
Commenting Preference:
The author encourages honest critique.