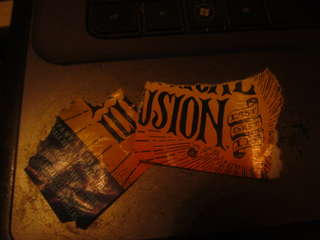 Put It Out There Bfore You Die, Sucker / 1.5 yr old cyber autobio-Communiqe to someone i don't recall

Yo, J_____..........
My 'alter ego' on FB isn't very alter.  I'm more openly 'myself' than most people who FB.   What can i say ?  My pootery, fotography, & probably most prominently music.  I long ago got sick of the shit ye have to do to be 'successful' in art, ($$$).......i'm from BrooklynNY, but thru accidents of marriage, got stuck in Kanzass (whilst on my way to SF in 1971).......well, in the 1990's I got to be the proverbial 'big fish-small pond'  by founding & running the Coleman Hawkins Neighborhood Festival (1995-2008, tho i dropped out of all administrative functions in 2003),  I had weekly local radio shows between '92 & '99, & for a very loosely organized 'jazz group' had a fair amount of bookings for coffeehouses, weddings, parties, etc. I had two CD releases in 2001...."Tao & Grace" on Earthstar label, & "Handmade Topeka 1991-1998"........don't have any copies left, but most of the tracks are on youtube or soundcloud.
well, '99-'00 brought me Cardiac Adventures #1...5 heart attacks in 7months which were underdiagnosed, then led to a whopping sextuple bypass in May of 2000.  A miraculous recovery fueled by an amazing 'life partner'..........then lost her to bizarre circumstances in '03, which led to 7 yrs as a street musician, which made my devastated self to make enough $$ for room rent, & basic living expenses.   I had a partime job in corporate retail to keep me in health insurance, which, on the 10th anniv of my employment there, led to my being 'accused' of collaborating wit a long-gone manager to have "embezzelled" many years of health coverage from the blessed company....which was totally untrue.....they had been wanting to get rid of me for some time because i was always sending criticisms of bullshit marketing stuff to the home office (which they encouraged),  & then, in 2010, they made a publicity statement of a commitment to "going green"......months went by & nothing re: recycling proceedures had changed.  So I got fired on the day that I was supposed to be 'vested' in their retirement program.    HA!   amazing life-joke. So i started applying for disability shit. I totally thought cardiac adventures 'miracle' was gonna collapse any minute..........so, my daddy saved my ass as he was dyin & needed somebody to live with him, so there i went to the Outer Banks of NC to spend 11 months with the man who turned me out of his home some 39yrs earlier for being a 'communist', lived with him for 11months, uncountable dialysis sessions (his), & 2 amputations later(his), we was best buddies, & the he died. Serendipitously, within a short time after he died, my SSDI disability was approved.  A brother of mine, who i have almost nothing in common with, had recently been divorced will 90% custody of his 14yr old daughter, offered me a room 16miles from the ocean in exchange for my  payin 35% of his mortgage. so here i had the hunkydory life of a retired Florida beach bum, living in a small room in a "security" suburpan townhouse....better than livin alone, though most definitely 'out of my element'.......well, more, & totally different cardiac adventures led me to have to "cheat death" again 3 times in early in 2015.   Something about me, (I believe some psychic alteration incurred in my initial cardiac adventures has made it impossible for me to even a casually semi-intimate 'relationship'.....many have made like they were interested, then would disappear.   An uncannily consistent occurrence since the Elizabethan Tragedy of 2002..............okay...that's it, & what does any of it matter in the space of eternity................peace&blessings////dkzk

Written by dkzksaxxas_DanielX (DadaDoggyDannyKozakSaxfn)
Published 5th Feb 2018
Like This?
Poems by Author
Author's Note
qw.dudeufeucgec !!!! ..... oh, sorry kids
Comment
All writing remains the property of the author. Don't use it for any purpose without their permission.
likes 6   reading list entries 4
comments 10   reads 699

Commenting Preference:
The author encourages honest critique.
Re. Put It Out There Bfore You Die, Sucker / 1.5 yr old cyber autobio-
dartford (Paul S...)
5th Feb 2018 2:01am
nice piece -
life is a mess,
so it's good to get a few
things straight ..

The above is a decent snippet of you, your character, though it does leave a lot or room for expansion. founding the festival, getting the headliners. the life partner, the circle of relationship with your father etc. I expect you could fill volumes

Read poems by dkzksaxxas_DanielX
Re: Re. Put It Out There Bfore You Die, Sucker / 1.5 yr old cyber auto
dkzksaxxas_DanielX (DadaDoggyDannyKozakSaxfn)
- Edited 17th Feb 2018 1:40am
17th Feb 2018 1:35am
I don't know how much of what yr curious about will ever be 'documented' in this manner.  And it's not like much of a big deal. I deeply appreciate your expressed curiosity. The only way I can work this shit anymore is via spontaneous, improvisational means, so, I never know what's gonna come out. I prefer it that way.

Read poems by dkzksaxxas_DanielX
Re: Re. Put It Out There Bfore You Die, Sucker / 1.5 yr old cyber auto
dkzksaxxas_DanielX (DadaDoggyDannyKozakSaxfn)
17th Feb 2018 1:35am
I don't know how much of what yr curious about will 'documented' in this manner.  The only way I can work this shit anymore is via spontaneous, improvisational means.

Read poems by dkzksaxxas_DanielX
Re. Put It Out There Bfore You Die, Sucker / 1.5 yr old cyber autobio-
Ahavati
6th Feb 2018 00:39am
I really enjoyed reading this, Danny. 📝

Thank you for sharing.

Re: Re. Put It Out There Bfore You Die, Sucker / 1.5 yr old cyber auto
dkzksaxxas_DanielX (DadaDoggyDannyKozakSaxfn)
6th Feb 2018 8:39pm
thank you for takin time to read

Read poems by dkzksaxxas_DanielX
Re. Put It Out There Bfore You Die, Sucker / 1.5 yr old cyber autobio-
case28 (Alexander Case)
16th Feb 2018 10:44am
Compelling life [short] story! I dug the delivery, I thought it had that punchy Guy Ritchie, Lock, Stock and Two Smoking Barrels narrative style.  I agree with the previous gentleman's comment, there's plenty of material here for more of your punchy prose.