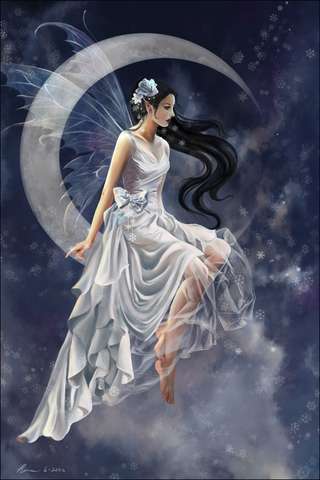 Daughter of the Moon

T 'was a cloudless night on the eve of her birth,

The wind was silent, and the sea was calm;

Excitement vibrated deep within the earth,

A babe's cry pierced the air in repeated song.


An Ocean Princess blessed the King and Queen,

Their joyful laughter drowned out her cries;

She was the most beautiful that any had ever seen,

Awe struck the hearts of all who have gazed into her eyes.


The stunning color of priceless emerald,

And a thick patch of hair as black as night;

The King sent out his most-trusted Harold,

To announce the birth of the Princess of moonlight.

A wonderful life awaits you, O daughter of the Moon,

May your days remain bright as the sun in high noon.


As the years passed by, the Princess grew in beauty,

Peace filled the souls of those who heard her singing,

Her large group of admirers all thought: "I wish she was mine."


T 'was a similar night to the one of her birth,

Where she met her other half;

An honorable Lord of mighty worth,

Clad in golden armor and carrying a great staff.


Deep within the woods the Lord heard her sing,

A sound of which could not be compared;

He beheld his first sight of the daughter of the King,

Awe filled the Lord's soul as he thought her most fair.

A wonderful love will bless you, O daughter of the Moon,

Many would kill for the honor to listen to your tune.


The Lord stepped out into the moonlight,

With a swirl of her dress the Princess spun around;

Time stood still as they locked on sight,

Their quickening heartbeats were the only sounds.

The Lord immediately fell in love with the Ocean Princess;

Deep within the Lord's heart ignited a passionate fire,

He vowed to himself to protect his most precious.


Long into the night the pair danced and sung,

In those hours before dawn they felt incredible bliss;

The Lord and the Princess both knew they had found their one,

And so, a beautiful vow was sealed with a kiss.

A great destiny lies ahead of you, O daughter of the Moon,

May your strength rival the force of a great typhoon.


T 'was a beautiful spring day when the pair was wed,

Their love for each other warmed their souls;

The Lord's gaze was tender as he laid his Lady to bed,

At last they have found each other and became whole.


The Ocean Princess and her golden Lord,

The hand of a healer and the strength of a warrior;

Immobile as statues, unflinching as the storm roared,

The breathing proof of something superior.


During the short minutes of the solar eclipse,

The Ocean Princess bore a daughter and a son,

With their father's golden mane, and an incredibly strong grip;

The Lord and Lady shared a smile as they knew their real journey had just begun.


For many years the Ocean Princess and her Lord lived happily,

Their souls were most at peace when with their family,

This was the tale of the Princess born in moonlight.

Written by LunasChild8
Published 27th Dec 2017 | Edited 30th Dec 2017
Like This?
Poems by Author
Comment
#forest #love #moon #narrative #night
All writing remains the property of the author. Don't use it for any purpose without their permission.
likes 6   reading list entries 2
comments 10   reads 647

Commenting Preference:
The author is looking for friendly feedback.
Re. Daughter of the Moon
PoeticInjustice
27th Dec 2017 3:19am
This was pretty cool.  It's just asking for a minstrel with a lute to tell it's tale.

Re: Re. Daughter of the Moon
LunasChild8
27th Dec 2017 3:27am
Thank you very much! I'd say someone like Malukah singing it would be awesome. ;p

Read poems by LunasChild8
Re. Daughter of the Moon
Anonymous
1st Jan 2018 9:45am
great story with a great cadence, rhyme scheme and just the right touch of old English and the dark ages along with the moon to make it mystical..enjoyed!

Read poems by LunasChild8
Re: Re. Daughter of the Moon
Anonymous
2nd Jan 2018 4:49am
YW and yes I see it being sung to harps and a beautiful voice

Re: Re. Daughter of the Moon
LunasChild8
2nd Jan 2018 6:08pm
Definitely! A singer like Malukah or Eurielle.

Read poems by LunasChild8
Re: Re. Daughter of the Moon
Anonymous
3rd Jan 2018 10:56am
yes:) and I love the moon....that rules the inner you in astrology...in my case scorpio...one of the key components of the triad..

Read poems by LunasChild8
Re. Daughter of the Moon
Jade-Pandora (jade tiger)
8th Feb 2018 5:46am
How sweetly & lyrically this piece played in my mind.  Being orally recited in song as a young man traveling on foot back in the day, for it was the way, singing to those who met him on the roads he’d walk, leaving them enchanted as he’d continue to the next hamlet & gathering folks who could not read a single word but they knew well of what they heard.

Re: Re. Daughter of the Moon
LunasChild8
8th Feb 2018 5:57am
I wrote this to mimic how a harold or a wonderer would tell the tale to people they meet.