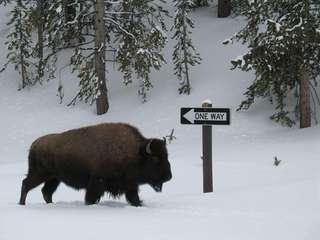 Upon the Trail of Tears
a Buffalo Spirit retracts
forgotten steps

Its solitary shadow
a historical reminder
of native annihilation;

But hopes of eradicating
( via relocation )
an indigenous population

About December 15, 1838, during the Trail of Tears, the Cherokee Nation was forced to spend the winter in the area of what is now the Trail of Tears State Forest. Floating ice on the Mississippi River made it impossible to cross. At least 4,000 Cherokee Indians died that winter along with the pride of a nation that [they thought would never ] be restored.

This is for my ancestors, whose surviving blood flows through me and that of my brothers and sisters, Atohi, a Spirit-Guide between dream and reality;

and J, that BEAUTIFUL reality. 💜

Photo credit: Tatanka
"You're not the boss of me"

Written by Ahavati
Published 8th Dec 2017 | Edited 9th Dec 2017
Like This?
Poems by Author
Comment
All writing remains the property of the author. Don't use it for any purpose without their permission.
likes 14   reading list entries 2
comments 21   reads 904

Commenting Preference:
The author encourages honest critique.
Re. One Way ( or another )
ORPHEUS
8th Dec 2017 10:10pm
Beautiful and powerful. I like the rhythm of the poem, it works really well.

Read poems by Ahavati
Re. One Way ( or another )
jemac
8th Dec 2017 10:21pm
So beautiful Ahavati ... I did not live far from the Trail of Tears ... The land i borrowed for a while was full of spirit energy ... American Indians were in teepees behind my home. They would come in the middle of the night to get water from my outside spiget... I loved having them there ..

Read poems by Ahavati
Re. One Way ( or another )
dkzksaxxas_DanielX (DadaDoggyDannyKozakSaxfn)
- Edited 8th Dec 2017 10:51pm
8th Dec 2017 10:34pm
Great Homage, lil'sister. Dada loves ye. Superb photo......... How, tell me fckn HOW can anyone Be Proud of this fckn sham-democrazy country with a fckn Heritage built upon mega'multi-1000s of Atrocities such as this.......how much WhiteMan  (including England, France, Spain, USA, (CIA) German, Dutch) imperialist degradation of the nonwhite peoples of the world can we (continue to) sanction?  With only RIDICULOUS tokenistic 'reparations', while we continue to Honor the memories of these fucking Conquerers? !!!!!!!
Sorry....this stuff always hits a deep nerve in me.......Shame on our so-called Humanity ! SHAME on the "official" versions of History that have been drummed into our dumAss heads for centuries.

I haven't put much thought in their journey, but now I am more in horror,
of how cruel it is for the settlers to have done such a thing.
I am not a professional, for I  cannot critique, but I acknowledge your skills.

Read poems by Ahavati
Re. One Way ( or another )
dartford (Paul S...)
8th Dec 2017 10:55pm
to cut off the food supply has been
a pretty cowardly strategy
since the time of Caesar and beyond ..

but what a great picture ..!

Re: Re. One Way ( or another )
Ahavati
10th Dec 2017 3:14am
And to think there are global corporations attempting to control the world's supply, Paul. We never seem to learn.

Re: Re. One Way ( or another )
Ahavati
10th Dec 2017 3:21am
That would put you at about 12.5 %. Unless there were more intermarriages after your great grandparents. Then you would have more.

The Cherokee Nation has no blood quantum requirement. You should register if you haven't, Brother. 🐎

and give Thanks to Atohi *

Read poems by Ahavati
Re. One Way ( or another )
AtoMikbomb
9th Dec 2017 8:18am
When people say things like "unspeakable" to describe cruelty and atrocities, it's an expression of horror, and the Trail Of Tears (and a myriad of other crimes against the native people) is certainly that. But "unspeakable" isn't usually a fitting reaction to traumatic events, as words can foster awareness, healing and empathy. What you've written here is exactly that sort of thing.

Truly a work of beauty.

Read poems by Ahavati
Re. One Way ( or another )
Solomon_Song
9th Dec 2017 8:56pm
Having not (being not American) heard of this before (as a reason among others that nearly led the buffalo to extinction), this is a succinct picture of what was doubly near-genocide (both of the Cherokee people and the buffalo species).

Until the Lions have their day, history belongs to the hunters. - African Proverb