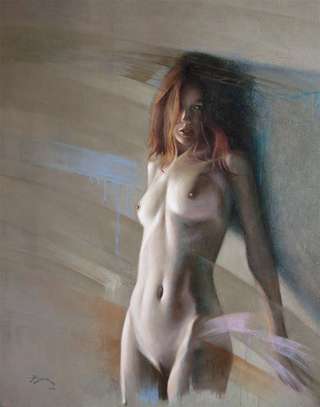 For lie to all, & to each, tell a little truth.

it was her cool, steady gaze, I suppose.
the strange chroma of her eyes –
a blue-gray mix you won’t find in the sky;
you’ll see it in the rain.

a woman sits at the bar, appraising her marauder lips in the
backdrop glass; red like a red red rose. she displays herself as
if she’s available…  asking for it. but every dame has a boyfriend.
or a girlfriend.

it’s the allure of the clandestine, the sordid, the stranger.
sex is the crime of the lonely & the brave.

we figured to dance the sins of flesh & fantasy. we’d rendezvous in
3D illusions; we made a dowry of motel rooms. & after I fall into the
deep, muddy river of love, she is gone. caught a train to the somewhere
of a nowhere, unmapped. silent phones & trashed love letters.

so I caress my sorrow, close to my shot glass, & compose a tragic
romance. about her. about her eyes & her forbidden heart. the shadow
of an ode, the echo of a sonnet.  a man calls himself a poet, but it’s
the whiskey that makes the poem, I’m just along for the ride.

after a few drinks, the blues cast the industrious net of melancholy over
me. I get pensive. petulant. but it’s not enough to be drunk & angry,
you have to use it, like a loaded gun.
make a great mistake.

so I light the tip of a twisted poem
and burn down the night,
while my heart keeps the philosophy
of a one-night stand on lockdown:

for lie to all, & to each,
tell a little truth…

Exceptional work, John, just beautiful.
And that photo is so lovely.
Such an amazing mind you have...

Re. strange chroma
Anonymous
17th Aug 2017 2:03pm
"so I light the tip of a twisted poem
and burn down the night,
while my heart keeps the philosophy
of a one-night stand on lockdown"

Sometimes the fire can only be properly raged upon the surface of paper. And you do an incredible job with this piece. So beautiful

Re. strange chroma
jemac
17th Aug 2017 9:03pm
Such a vivid picture you create ... with watchful eyes
a beautiful tapestry
of truth and lies ...
Mesmerizing ink JohnFeddeler

"so I light the tip of a twisted poem
and burn down the night,
while my heart keeps the philosophy
of a one-night stand on lockdown:"

What you never do is lockdown the ache of one's heart...this breaks mine...and I will always thank you for that...With love, always - Kitten xoxo

Re. strange chroma
badmalthus (Harry Rout)
18th Aug 2017 2:03am
There are indeed some poems that surpass the definition of poetry...they rise up to to sit at the feet of the gods...this is one such poem John...I bow deeply.
Cheers...Harry

Re. strange chroma
PoetsRevenge
18th Aug 2017 4:52am
This one is a king of metaphors, and I can even hear the twisting and burning you describe at the end, I think the twist to that last line accentuates that....

Re. strange chroma
crowfly
18th Aug 2017 8:14pm
Love this tragic romance, or twisted poem.  Either way it's fine work.  And I always admire your choice of ladies...

Re. strange chroma
Anonymous
1st Sep 2017 7:21am
very beautiful - so wonderful to read.

Re. strange chroma
runaway-mindtrain
8th Sep 2017 10:49am
all around excellent on this brother...had to had it to the wheelbarrow..good digital ink-J

Re. strange chroma
RoseJasmine
13th Sep 2017 10:48am
"for lie to all, & to each, tell a little truth… " it is so true. Dear John,  your poem has everything about life and the beauty no matter what, only a wise mind can catch. it's you John.....
RoseJasmine